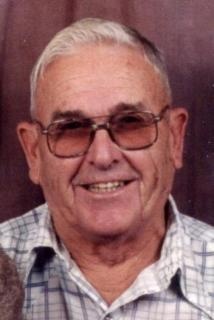 Memorial Services: Will be held on Saturday, February 25, 2017, at 10:30 a.m. at the Steen Funeral Home in Greenfield with burial in the Evergreen Cemetery, Anita, Iowa. A luncheon will be held at the Anita American Legion in Anita following the committal services at the cemetery. Pastor Cathy Nutting will officiate the service. The Steen Funeral Home in Greenfield is in charge of the professional arrangements.

Memorials: Memorials may be directed to the Leland Johnson memorial fund to be established by the family at a later date.

Leland Dean Johnson was born May 15, 1923, the son of Bert and Vevian (Eshelman) Johnson in Grant Township, Cass County, Iowa. He passed away on Monday, January 9, 2017, at the Good Samaritan Society in Fontanelle, Iowa, at the age of 93.

Leland grew up in Cass County where he attended rural school until the 8th grade. After his schooling he farmed with his father and brother, Howard. On May 15, 1949, he was united in marriage to Margaret Louise McAfee at her parents family home south of Anita. Three sons were born to the union: Dale, Lyle and Elvin.

In 1957, Leland decided to leave the family farming without telling anyone but his wife. He headed to California arriving in Long Beach at a friends home. The next day he applied for a job at Stauffers Chemical Plant and was hired. A month later his wife and three small sons arrived by train to join him in Long Beach. He was employed with the plant for 28 1/2 years.

Leland and Margaret retired back to the midwest, first El Dorado Springs, Missouri and later to their hometown of Anita. Margaret passed away on May 24, 2001.

Leland was honored as a 50 year member of the Masonic Lodge No. 380 in Anita on June 23, 2003. On February 14, 2004, he was united in marriage to Karen Westergaard in Las Vegas. In May of 2010, Leland was baptized and joined the Greenfield United Methodist Church. Leland and Karen were able to travel to 48 states and Canada, having large garage sales with people coming as far away as New Zealand and Australia. He loved traveling, swap meets, auctions, didn't know a stranger and loved visiting and joking.

To order memorial trees or send flowers to the family in memory of Leland Johnson , please visit our flower store.