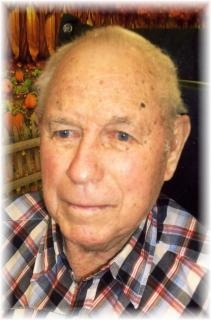 Funeral Services: Will be held on Tuesday, January 28, 2014, 10:00 a.m. at the Emmanuel Lutheran Church in Fontanelle with burial in the Canby Cemetery, rural Fontanelle with full military graveside rites by the Fontanelle American Legion Carlson Post No. 247. Pastor Steven Broers will officiate the service. A luncheon will be held at the church following the burial.

Visitation: Will be held on Monday evening from 5:00 p.m. to 8:00 p.m. at the Steen Funeral Home in Fontanelle with the family present.

Memorials: To the Leon Cooper memorial fund to be established at a later date.

Leon was raised and grew up in Adair County, Iowa. He served his country in the United States Navy during World War II. On August 13, 1950, he was united in marriage to Sylvia Baudler in the Emmanuel Lutheran Church in Fontanelle. To this union five children were born: Becky, Ralph, Ivan, Bonny and David. They farmed northwest of Fontanelle. Leon retired from farming at the age of 58 and moved to Arizona in their fifth wheel for thirty years, returning to Iowa for three months every year. While in Arizona he started his own handyman business in Mesa.

Leon loved to travel, take Sunday trips with his family, enjoyed square dancing, playing cards, played the piano by cord and he helped Sylvia make many quilts through the years.

To order memorial trees or send flowers to the family in memory of Leon Cooper , please visit our flower store.