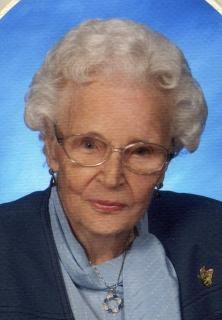 Funeral Services: Will be held on Friday, April 27, 2012, at 10:30 a.m. at the United Methodist Church in Massena with burial in the Massena Center Cemetery.

Memorials: To the Leona Groves Memorial Fund to be established by the family.

Leona M. Groves passed away on Tuesday, April 24, 2012 at Heritage House in Atlantic, IA. She was born in Cumberland, IA on November 5, 1914 to Frank and Minnie (Lehman) Jarvis. She attended Cumberland High School where she played basketball on three state tournament teams. She graduated from Cumberland High in 1934.

On July 28, 1934 she married Robert E. Groves in Des Moines, in a ceremony performed by Bob's uncle Rev. Paul Becker. They moved to a farm north of Massena where they raised their two sons, Richard and Bobby Dale.

Leona was a great cook. Her grandchildren especially liked her chocolate pies. She loved her grandchildren and they spent many summers taking turns going to grandmas for a week. She could also tell you many stories about them that their parents didn't know. Leona was known for her kindness and gentle ways. As her mother aged she took her into her home to care for her. She lived with Bob and Leona for nine years until her death.

Bob and Leona lived on the same farm until Bob's death in 2000. She moved to Heritage House in August of 2010 .

Leona was preceded in death by her husband Bob , grandson Randy Groves in 2011, three brothers -Elwin, Harley, and Herbert -and four sisters-Ruby, Zeta, Hazel and Helen.

To order memorial trees or send flowers to the family in memory of Leona Groves , please visit our flower store.