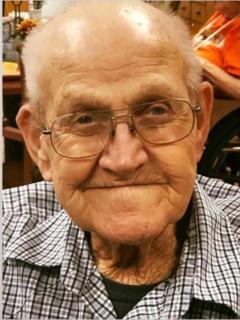 Memorials: Memorials may be made to the Leroy Nelson memorial fund to be established by the family.

Leroy’s family lived in Missouri, Page County, and Montgomery County, Iowa. He attended his last year of school in Essex, Iowa. After leaving school Leroy worked as a truck driver for various employers. Leroy entered the Army on October 24, 1951, and was stationed in Fort Knox, Kentucky for basic training. He went to Korea in 1952. Leroy was honorably discharged from the Army in July 1953. He served 6 years in the Reserves. After discharge, he worked for Montgomery County on the surveying crew.

Leroy was united in marriage on November 4, 1955 to Roberta Carns in Red Oak, Iowa. Four children were born to this union, Susan, Sherry, Dale and Stacey. Leroy and Roberta started farming in Adair County in the spring of 1956 on his father-in-law’s farm. The family moved to Fontanelle in December, 1962, renting farm ground west of Fontanelle. They purchased their farm 5 years later. Leroy and Roberta retired from farming and moved to their house in Fontanelle in 2002. Leroy drove a truck for Schildberg Construction part-time for several years during his retirement. Leroy’s declining health forced a move to the Good Samaritan Center in June 2018. Leroy was active for many years with the American Legion, Farmers Cooperative board member, Summerset Township Trustee, and was a founding member of the Fontanelle Lion’s Club. Leroy had a deep love for horses and owned them for most of his life.

To order memorial trees or send flowers to the family in memory of Leroy Nelson , please visit our flower store.
Send a Sympathy Card