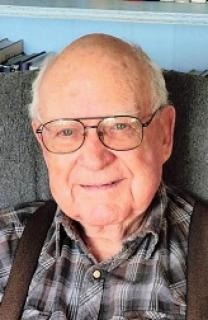 Funeral Services: Will be held on Tuesday, January 4, at 10:30 a.m. at the First Baptist Church in Cumberland, Iowa with burial following in the Massena Center Cemetery with full military graveside rites conducted by the Anita American Legion.. A luncheon will follow the burial at the Cumberland Community Building. The Lamb Funeral Home of Massena is in charge of professional arrangements (formerly Steen Funeral Home).

Memorials: Memorials may be made to the Leroy Whipple memorial to be established by the family at a later date.

Leroy Walter Whipple was born December 30, 1934, the son of Isaac Oliver and Goldie Marie (Martin) Whipple in Swanton, Ohio. He passed away at his home in rural Massena, Iowa at the age of 86.

Leroy grew up on his family farm in Delta, Ohio. In the fall of 1952, he attended an old fashioned tent revival meeting where he saw his need of having a relationship with His Savior and accepted Him into his life. He was baptized two weeks later. He graduated high school in 1953. In 1955 he joined the Air Force. He married the love of his life Linda Mae Sheffer on June 9th, 1957. To this union four children were born: Sherry Lynn, LeRoy Alan, Miriam Kae, and Isaac Walter.

They served the Lord together in the different churches they attended. He was a Sunday School teacher, deacon, trustee, janitor, and helped with Awana.

He retired from the Air Force after 20 years of service. He worked for the School of Mines and Technology for 30 years following his Air Force service. He helped Rapid Valley Faith Baptist Church build a new addition on their building.

He was preceded in death by his parents, his wife Linda, his infant sister Nora, his brother Norman, his infant brother Raymond, and his sister Racheal.

To order memorial trees or send flowers to the family in memory of Leroy Whipple , please visit our flower store.
Send a Sympathy Card