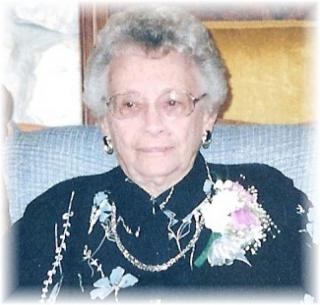 Funeral Services: Will be held on Saturday, December 6, 2014, at 10:30 a.m. at the Fontanelle United Methodist Church with burial in the Fontanelle Cemetery. Pastor Laurel Westerkamp will officiate the service. A luncheon will be held at the church following the committal services at the cemetery.

Memorials: To the Letha Davis memorial fund to be established by the family at a later date.

Letha Neola Crist Davis was born December 5, l911 to Winfred and Clara(Herrick) Crist, in Richland Township, Adair County, Iowa. She was the oldest of two children. She passed away November 29, 2014 six days short of her 103rd birthday at her daughter's home in Phoenix, Arizona where she had lived since October 2012.

Letha was baptized as a Christian in the Methodist church at Nevinville, Iowa. She received her schooling in Fontanelle, Washington Township, Avondale, and Richland Center. On October 16, 1929, Letha married Harold Davis at her uncle's home in Bridgewater, Iowa and they began their years of farming 7 miles south of Fontanelle. In 1941, they purchased Harold's family farm in Washington Township and she resided there for 50 years until Harold's death in l991 (61 years of marriage). Harold and Letha had five children: Russell Lawrence, Terry Lee, Kathleen Sue, and two still born infants. They also considered Letha's nieces, Sherry, Dee and Debbie Faurote, their children when her sister Betty died at a very young age.

Letha was a lifelong member of Avondale Methodist Church in Washington Township. She was a hardworking farmer's wife, having started their married life during the great depression. She gardened, canned, sewed, quilted and was one of the best cooks we knew.

Letha was preceded in death by her husband, her son,Terry, her parents, her sister and many brothers/sisters-in-laws, nieces, nephews, relatives and friends.

To order memorial trees or send flowers to the family in memory of Letha Davis , please visit our flower store.