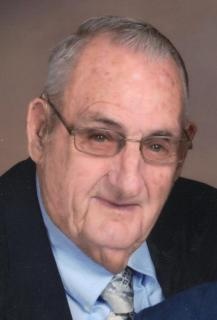 Funeral Services: Will be held on Friday, August 10, 2018, at 10:30 a.m. at the Greenfield United Methodist Church in Greenfield with burial in the Greenfield Cemetery with full military graveside rites by the Greenfield American Legion Head-Endres Post No. 265 and V.F.W. No. 5357. A luncheon will be held at the church following the services at the cemetery. Pastor Melodee Carstens will officiate the service.

Open Visitation: Friends may call at the Steen Funeral Home in Greenfield on Thursday, August 9th, from 4:00 p.m. to 8:00 p.m.

Family Visitation: The family will greet friends on Thursday evening August 9th from 6:00 to 8:00 p.m. at the Steen Funeral Home in Greenfield.

Memorials: May be made to the Lewis Shike memorial fund to be established by the family at a later date.

Lewis Owen Shike, 81, passed away Tuesday, August 7, 2018 from a massive heart attack. Lewis was born in Adair County on September 29, 1936 to Myron and Elizabeth (Wolfe) Shike and lived his entire life there with the exception of the six months he spent in the Army Reserve in Fort Leonard Wood. He served six years in the Reserves.

Lewis attended country grade school and went to high school thru 10th grade and quit to help farm with his dad and later got his G.E.D.

On February 17, 1963 Lewis was united in marriage to Beverly Joan Parsons. To this union three children were born, Brenda, Vickie, and David.

Lewis worked for Harvey Paul, a John Deere dealer, and the Co-op before he farmed full time. In 1965 he started working for Schildberg Construction as a soil sampler then a lime salesman in Mills and Pottawattamie County and retired being a rock inspector in 2001. He bought the farm in 1971 where he lived until death.

Lewis enjoyed fishing, hunting, and camping. He collected two cylinder JD tractors and was very proud of them. In later years he enjoyed driving his Kubota U.T.V. Side by side to feed the fish in his ponds.

Lewis was preceded in death by his parents and step-mother, Helen Shike.

The family wishes to extend its gratitude to those who have served Lewis and his family during this difficult time.

To order memorial trees or send flowers to the family in memory of Lewis Shike , please visit our flower store.