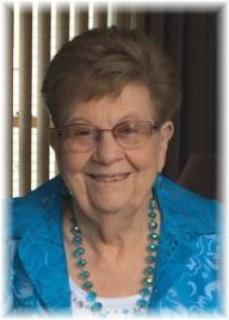 Funeral Services: Will be held on Thursday, September 11, 2014, at 10:30 a.m. at the Greenfield United Methodist Church with burial in the Fontanelle Cemetery. The Steen Funeral Home in Greenfield is in charge of the professional arrangements.

Open Visitation: Friends may call at the Steen Funeral Home in Greenfield on Wednesday, September 10th, from 2:00 p.m. to 8:00 p.m.

Family Visitation: The family will greet friends on Wednesday, September 10th, from 6:00 p.m. to 8:00 p.m. at the Steen Funeral Home in Greenfield.

Memorials: To the Lois Dix Memorial Fund to be established by the family at a later date.

Lois Maude Dix was born March 27, 1934-the daughter of Howard and Mildred (Rabe) Sherer in Cass County Iowa. She passed away on Sunday, September 7, 2014 at the Adair County Memorial Hospital in Greenfield at the age of 80.

Lois lived south of Massena on a farm and attended country school until the 7th grade when her parents moved south of Creston and she attended school at Cromwell. On June 15, 1951 she was united in marriage to the love of her life-Richard Duane Dix at the Cromwell Church. To this union they were blessed with 3 children: Dallas, Rhonda, and Greg. The family eventually made their home near Fontanelle, Iowa where they lived for 29 years and then made their final move to Greenfield in 1989.

Lois worked as a cook at the Good Samaritan Society in Fontanelle for 19 years, retiring in 1993. She enjoyed traveling, dancing and spending time with her many friends, especially the “coffee” ladies and her TOPS group. She was an avid Iowa Hawkeye fan, watching every game and attending many bowl games with her brother in law and his wife, Charlie and Ruth Dix. She was a long standing member of the Greenfield United Methodist Church and TOPS in Greenfield.

To order memorial trees or send flowers to the family in memory of Lois Dix , please visit our flower store.
Send a Sympathy Card