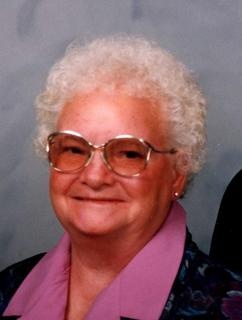 Funeral Services: Monday, August 8, 2011, at 2:00 p.m. at the Trinity Christian Church in Bridgewater with burial in the Garner Cemetery with Auxilary Services.

Family visitation: Sunday evening from 5:00 p.m. to 7:00 p.m. at the Steen Funeral Home in Fontanelle.

Memorials: To the Lois Funke Memorial Fund to be established by the family.

Lois Irene (Ruch) Funke was born September 17, 1925 to Leroy and Nellie Ann (Campbell) Ruch at their home in rural Adair County, Iowa. She passed away August 5, 2011, at the Good Samaritan Center in Fontanelle, Iowa.

Lois was raised in rural Adair County and attended country school. On December 29, 1942, she was united in marriage to Howard Funke at the First Methodist Church in Seattle, Washington. To this union, two sons and four daughters were born: Rebecca, Sherry, Howard, Marcia, Rocky and Cindy.

After school, Lois worked for various families in the community helping out with childcare and household duties when new babies arrived. While Howard served in the Army, Lois remained in Washington and worked at a canning factory where she always talked about being paid in silver dollars. In later years, after returning to Iowa, Lois worked on the farm as the “hired hand” and in town as a waitress. Later on, she worked in the Bridgewater-Fontanelle Schools as a janitor and cook from which she retired in 1990.

Lois enjoyed quilting and playing bingo. She was a long-time member and past President of the William Thompson Legion Auxiliary Post 703. She was also a member of the Trinity Christian Church in Bridgewater and the Martha Circle.

To order memorial trees or send flowers to the family in memory of Lois Funke , please visit our flower store.