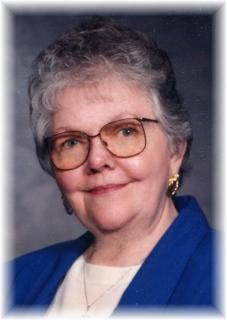 Lois Gross passed away on Thursday, April 19, 2012, at her sister’s home in Edina, Minnesota.

Funeral Services: Will be held on Monday, April 23, 2012, at 10:30 a.m. at the Emmanuel Lutheran Church in Fontanelle with burial in the Fontanelle Cemetery.Pastor Steven Broers will officiate the service.

Visitation: Will be held on Sunday, April 22nd, from 4:00 p.m. to 8:00 p.m. at the Emmanuel Lutheran Church in Fontanelle with the family greeting friends from 6 to 8 p.m.

Memorials: Memorials may be made the Lois Gross memorial fund to be established by the family.

Lois Mae Seegers Gross was born June 6, 1929 to Rev. Arthur J. and Louise (Stave) Seegers in the Parsonage at Plainview, Nebraska. She was baptized June 23, 1929 at the Eden Valley Lutheran Church, Plainview, Nebraska by her father. In 1935, when Lois was six years old her family moved to Fontanelle from Parkersburg, Iowa and lived in the parsonage for fourteen years. She attended Sunday School, Bible School, and Saturday morning confirmation classes. Lois received her formal education at the Fontanelle Public School.

On August 11, 1946 she was united in marriage to George Ehm Gross at the Emmanuel Lutheran Church in Fontanelle with her father officiating. They lived and farmed the home place for 46 years until moving to town in 1992. To this union four sons were born: Timothy George, Alan Luther, Matthew K., and Max Arthur.

Lois had many interests: teaching Sunday School and Bible School, serving on the Altar Guild for fifteen years, compiling and publishing the church history "Through The Years", placing the Multiplics Unit on the parish hall stage in memory of her parents and compiling the pictures and names of the confirmation classes. She made 750 school kit bags to be distributed by Lutheran World Relief. Lois was owner and operator of "The Fontanelle Florist" for eight years, arranging flowers for numerous weddings and funerals.

Family was very important to Lois. The eight grandchildren and seven great-grandchildren were her pride and joy. The family gatherings were great fun and she always looked forward to planning, cooking and baking. These gatherings began in the dining room and as the family grew, the location was changed to the big room in the basement and eventually tables were set up in the garage for the feasts (always with decoration and table trim). Coloring and hunting Easter eggs, bingo at Christmas time, pie making classes, baking and decorating cookies, birthday cakes and parties were just a few of the many things she enjoyed doing with the grandchildren. When Grandma Lois babysat with any of the grandchildren, she had to bribe them with goody bags to get them to go home.

To order memorial trees or send flowers to the family in memory of Lois Gross , please visit our flower store.