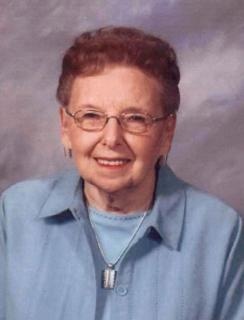 Funeral Services: Sunday, November 20, 2011, at the United Methodist Church in Bridgewater at 2:00 p.m. with burial in the Garner Cemetery, Bridgewater.

Memorials: To the Lois Roberts memorial fund to be established by the family.

Lois Virginia Sulgrove Roberts was born April 15, 1925, to parents Clifford and Grace Darling Sulgrove on the 'Old Follman Place' south of Bridgewater, Iowa. Lois began her schooling in country school and graduated from Bridgewater High School in 1942. She participated in extracurricular activities including the B.H.S. girls' high school basketball team. In 1939, she was very proud that, as a freshman, her team was the first to play in the new gymnasium. Lois taught in the country school system south of Bridgewater – some of her former students still reside in the Bridgewater area.

During World War II, Lois traveled to Utah to work in a factory supporting the war effort. Near the end of the war, while teaching south of Bridgewater, she was courted by an Army soldier and future husband, Dale Clifford Roberts. They were married July 23, 1945, in Greenfield, Iowa. Standing up for them were her sister, Marjorie, and husband, Gaylord, Dale's brother. To these unions were born five 'double cousins' – a special relationship that has continued to this day.

Lois was devoted to the town of Bridgewater. She belonged to the Bridgewater Methodist Church and the American Legion Auxiliary; worked for her brother, Merlyn, at both the Sulgrove Hardware and M. Sulgrove Implement Company; supported Dale's business, the Bridgewater Produce; supported her boys in the Washington Workers' 4-H club; and served as town clerk for 20 years in her 'retirement'. Lois became 'famous' in rural circles as the John Deere 'Parts Lady', finishing her 'John Deere career' with the McCunn Implement Company in Massena, Iowa. She was always grateful to Don and Ardell McCunn for their support both at work and in her later retirement years. Lois was involved in many local activities – Good Will Days; Roundup Days; selling poppies and participating in Memorial Day activities; the 1985 Bridgewater Centennial Celebration; and was always there for her boys with their school activities. How about her Harley motorcycle ride with Marlo Smith? And, at age 84!

In 2009, Lois moved to Algona, Iowa, to be closer to family, and passed away, unexpectedly, in her home Tuesday, November 15, 2011, at the age of 86 years and seven months. Sadly, her close friend and neighbor, Doris Gipple, passed away one day before Lois.

Lois was preceded in death by her parents (Cliff and Grace Sulgrove), one brother (Merlyn Sulgrove), sister (Marjorie Roberts), husband (Dale Roberts), and many beloved relatives and friends. Lois had previously lost her special aunts, Daisy Feazell and Gladys Johnson.

She will be missed by her family, friends in Bridgewater and surrounding rural areas, and her two loyal cats Bert and Buster. Lois has been, and always will be, special to Bridgewater.

To order memorial trees or send flowers to the family in memory of Lois Roberts , please visit our flower store.
Send a Sympathy Card