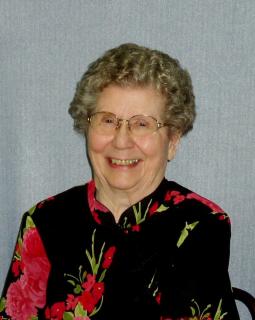 Funeral Services: Tuesday, December 6, 2011, at 11:00 a.m. at the Pine Grove United Methodist Church, rural Massena. Private family burial will be in the Massena Center Cemetery prior to services.

Open Visitation: Will be Held on Monday at the Steen Funeral Home in Massena from 2:00 p.m. to 8:00 p.m. with the family greeting friends from 6 to 8 p.m.

Memorials: To the Cumberland/Pine Grove United Methodist Churches with emphasis on missions.

She attended school in Massena, Iowa and graduated from Massena High School in 1933. The depression occurred and prevented Lola from attending college. During those years, besides helping her parents on the farm, she produced many lovely crocheted lace tablecloths, dresser scarves and afghans. In her middle to later years, she continued her handwork skills, learning tatting and enjoying making Christmas snowflakes, doilies and lace collars.

Eventually after high school, she earned her certificate to teach country school in communities near Massena. She occasionally remarked that some of the young male students were larger and older than her.

Lola became a full-time housewife after marriage to James E. McLaren on May 1st, 1941, in Maryville, Missouri. She returned to her girlhood home for three years while her husband was in WWII. After the war they made their home on a farm south of Cumberland.

Lola's family, church and neighbors were the most important parts of her life. She loved gardening and canning and one of her great joys was serving a marvelous meal, much of which was from her garden or the effort of her hands. Baking bread (especially cinnamon rolls and sweet type breads) was her specialty. Family to her was sitting around a large table laden with food with her children, grandchildren and great grandchildren.

Pine Grove United Methodist Church was her only church, becoming a member of it at age thirteen years. As an eigth grader, Lola accepted Jesus Christ as her Lord and Savior. She had great friends with the UMW women and helped in their many activities. A favorite time was the Pine Grove Windsor Pork Chop Meal usually held in the fall. The Iris Garden Club was also a much enjoyed neighborhood gathering in earlier years.

After the death of her husband in 1978, Lola became an international traveler, visiting England/Scotland, Europe, northern Africa, Israel, Mexico, Canada, South America, Japan and southeast Asia and Australia. Her favorites were Israel and Australia.

To order memorial trees or send flowers to the family in memory of Lola McLaren , please visit our flower store.
Send a Sympathy Card