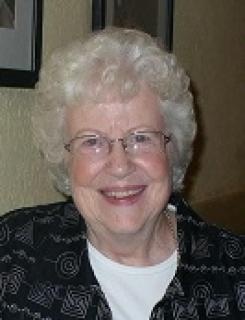 Funeral Services: Will be held on Thursday, February 11, 2021, at 11:00 a.m. at the Greenfield Gospel Chapel with burial in the Greenfield Cemetery. Mr. Phill Cannon will officiate the service. A luncheon will be held at the church following the burial.

Family Visitation: The family will greet friends on Wednesday evening from 5:00 to 7:00 p.m. at the Steen Funeral Home in Greenfield.

Memorials: To the Lola Stowell memorial fund to be established by the family at a later date.

Lola Mae (Campbell) Stowell was born in Orient, Iowa on September 4, 1931 to Howard I. and Lulu E. (Colwell) Campbell. She went home to be with her Lord on February 7, 2021 at the Greenfield Rehabilitation and Health Care Center at the age of 89 years, 5 months, and 3 days.

Lola was raised in Orient, enjoyed playing basketball there in high school - graduating in 1949. She worked with her mother at the lunch counter at the Orient Sale Barn, where she met the man that would soon be her husband. She married Kenneth Earl Stowell on Thanksgiving Day, November 23, 1950 in Greenfield. They were the parents of three children: Cheryl Marie, Bonnie Jean, and Dennis Earl.

The family lived in Greenfield with the exception of being in Montezuma, Iowa from 1961 - 1962. Lola was a woman of many skills as demonstrated by the variety of jobs she held. She worked at the Maid Rite Restaurant, Adair County Court House, ASC offices in Greenfield and Montezuma, S & S Needlecraft (Kay Shannon line), Social Services, Adair County Mutual, McKibban Hardware, and Crooks Clothing.

As if family and these occupations weren’t enough, she donated her energies to Greenfield Business Women, Greenfield Legion Auxiliary, and the Hospital Auxiliary. Lola’s faith in Christ was extremely important to her as shown by her involvement in Christian Women’s Club, and at the Greenfield Gospel Chapel.

Beyond that (!), she was involved in many other activities. She was on a bowling team, read books, did puzzles, and traveled. She especially enjoyed sewing, including making wedding dresses (and other bridal party gowns) for both of her daughters and several granddaughters. While she was able, she made quilts for each great grandchild.

All of her family still talk about the great things that came from her kitchen: beef and home-made noodles, graham cracker pudding, red and green pickles, applesauce - the list can go on and on.

To order memorial trees or send flowers to the family in memory of Lola Stowell , please visit our flower store.