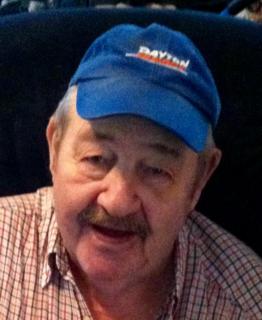 Funeral Services: Will be held on Monday, February 8, 2016, at 10:30 a.m. at the Emmanuel Lutheran Church in Fontanelle with burial in the Fontanelle Cemetery.  Full military graveside rites will be conducted by the Greenfield American Legion Head-Endres Post No. 265, VFW Post No. 5357 and Carlson Post No. 247 of Fontanelle.  A luncheon will be held at the church following the burial. Pastor Steven Broers will officiate the service.

Family Visitation: The family will greet friends on Sunday at the Steen Funeral Home in Greenfield from 2:00 p.m. to 4:00 p.m.

Memorials: To the Loren Baudler memorial fund to be established by the family.

Loren Virgil Baudler was born on October 30,1937, on the family farm three miles north of Fontanelle, Iowa, the son of Fritz and Marie (Lorenz) Baudler. He passed away Thursday, February 4, 2016, at his home in Greenfield, Iowa, at the age of 78.

Loren was baptized on January 1, 1938, and confirmed on April 6, 1952, in the Emmanuel Lutheran Church in Fontanelle, sponsors were Ern and Lizzie Baudler. Loren attended country school at Summerset #3 until the 8th grade and graduated from Fontanelle High School on May 17, 1956. He served for six months in the United States army serving in Fort Leonard Wood, MO and in the United States Army Reserve for 6 years.

On June 4, 1961 he was united in marriage to Norma June Petersen at the Emmanuel Lutheran Church in Fontanelle. To this union two sons were born: Todd Ray and Matthew Loren. Loren and Norma divorced in 1983. In 1992 Loren friended Joan Lilly. They lived together in Greenfield and Loren cared for Joan until she passed away on July 23, 2000.

In his earlier years Loren worked on the farm and raised his animals. Over the years Loren held a number of different duties including working as a farm hand for Dennis Lundy, helped in the back room as Places transitioned into Pamida, did janitorial work at the Historical Museum, and lastly helped out at the Adair County Fitness Center.

Loren was a stubborn, kind hearted man who enjoyed spending time with his family. Many Sundays Loren could be found in Panora, Iowa at his son's house playing with his grandchildren and enjoying his son Matt's cooking. He tried going daily to the Fitness Center to walk and was happy to help his "village" neighbors when possible. He loved watching his sports especially the Dallas Cowboys and Iowa Hawkeyes, but would enjoy the game show channel when there were no sports games playing. He was a simple man who knew what he liked which consisted of chocolate milk, harvest peach yogurt, and Cheeto Puffs. Loren loved being a father and grandfather, he had lots of love for his family.

He was preceded in death by his parents Fritz and Marie Baudler; son Todd Baudler; sister Ardis Lydon and her husband Robert Lydon.

To order memorial trees or send flowers to the family in memory of Loren Baudler , please visit our flower store.
Send a Sympathy Card