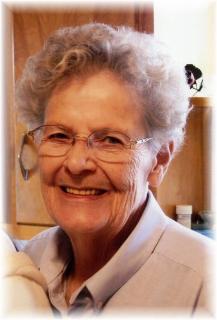 Funeral Services: Will be held on Tuesday, June 11, 2013, at 10:00 a.m. at the Fontanelle United Methodist Church with burial in the Fontanelle Cemetery. Pastor Cathy Nutting will officiate the service. A luncheon will be held at the church following the committal services at the cemetery.

Memorials: To the Lorraine Homan memorial fund to be established by the family at a later date.

Lorraine E. Homan was born on April 22, 1923, at her parents farm in Fontanelle, Iowa, the daughter of Glen Arthur and Elsie Jane (Morgan) Ewing. She passed away peacefully on Friday, June 7, 2013, at the Greater Regional Hospice Home in Creston, Iowa, at the age of 90.

Lorraine graduated from Fontanelle High School in 1940. She then went on and attended Stephens College in Columbia, Missouri and then went on to the University of Iowa receiving her Bachelor of Arts degree in education in 1944. On May 11, 1943, she was united in marriage to Glenn Homan in Maryville, Missouri. To this union seven children were born: Martha, David, G.E., Claudia, Sarah, Scott, and Hugh.

She is survived by her children, Martha Anderson and husband Red of Huxley, David Homan and wife Carmen, Claudia Stutzman and husband Steve, Sarah Weldon, R. Scott Homan, and Hugh Homan all of Fontanelle; ten grandchildren; twenty great grandchildren; other relatives and friends.

To order memorial trees or send flowers to the family in memory of Lorraine Homan , please visit our flower store.
Send a Sympathy Card