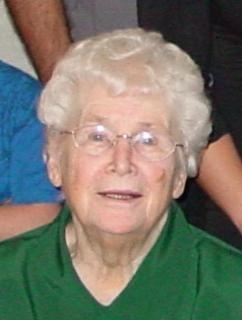 Funeral Services: Saturday, October 29, 2011, at 11:00 a.m. at the Trinity Christian Church in Bridgewater with private family burial in the Atlantic Cemetery.

Memorials: To the Louise Arp Memorial Fund to be established by the family.

Gladys Louise Edwards was born November 21, 1925 to LeRoy and Gladys Witt Edwards at their farm home in Lucas County, Iowa. She passed away October 25, 2011 at the Heritage House in Atlantic, Iowa.

Louise graduated from Chariton High School and taught 11 years in elementary schools in Lucas County, Polk County, and Des Moines, Iowa. On August 25, 1952 she received a Bachelor of Science degree in Elementary Education from Drake University. She had attended Saturday, night, and summer school classes for years.

Louise met Howard Arp at a square dance at Winterset in October 1953. They both belonged to the Rural Youth Organization that was state wide. Howard sent her a Christmas card and then saw her at a dance in Des Moines in February. They first dated while attending a State Convention at Ames, Iowa and then became engaged in June 1954. They were married at the Belinda Christian Church October 17, 1954.

After the honeymoon, they returned to the farm home that O.G. Whitney owned in the Massena area. The early years of marriage were busy ones. She raised chickens, cased the eggs, washed the cream separator, cooked for Howard's dad at noon, did tons of laundry, planted a garden, and canned vegetables and fruit. Howard milked cows, raised pigs, had stock cows and calves in addition to planting oats, wheat, corn, soy beans, and putting up lots of hay.

In 1958 they purchased a 240 acre farm from the Philip Karas estate across the road. In 1965 they moved to that farm and continued to farm the 360 acre Whitney farm. To this union three sons were born: Edward, John and Alan. Howard and Louise were married 36 years before Howard's passing March 19, 1991.

She is survived by three sons and six grandchildren: Edward Arp and wife Debra and their children Ashley, Lindsey, and Brandon of West Des Moines, Iowa; John Arp and wife Jennifer and their children Ryan, Angela, and Ethan of Massena, Iowa; and Alan Arp of Atlantic, Iowa; a brother Carroll Edwards and wife Maxine of Urbandale, Iowa; brother-in-law Paul DeVore of Russell, Iowa; sister-in-law Ruth Edwards of Chariton, Iowa; many nieces and nephews, family and friends.

She was preceded in death by her father and mother; sister Dorothy DeVore; and brothers Bill Edwards, and Ernie Edwards and his wife Wanda.

To order memorial trees or send flowers to the family in memory of Louise Arp , please visit our flower store.
Send a Sympathy Card