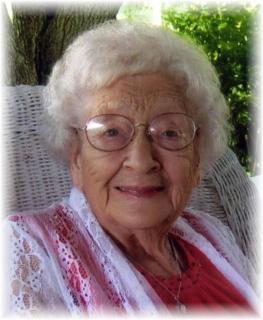 Memorial Services: Will be held on Monday, April 21, 2014, at 1:30 p.m. at the Immanuel Lutheran Church in Greenfield with burial in the Greenfield Cemetery. A luncheon will be held at the church following services at the cemetery. The Rev. Dr. Keith Schweitzer will officiate the service.

Visitation: Friends may call on Sunday from 3:00 p.m. to 7:00 p.m. at the Steen Funeral Home in Greenfield with the family greeting friends from 5 to 7 p.m.

Memorials: To the Louise Holland memorial fund to be established by the family at a later date.

Norma Louise Holland was born on the 13th of May, 1921, in Grove Township, Adair County, Iowa and died April 15, 2014 at the Good Samaritan Society in Fontanelle, Iowa. She was the oldest daughter of Willis and Fern Harrison Plymesser. She received her education in Adair County rural schools and Greenfield High School. Louise was lovingly known as Sis by her sisters, Weese by her nieces and nephews, and Mom. In her younger years she played the guitar, while her sister, Hazel, played the mandolin entertaining at school and church functions. Sometimes her younger sister, Letha, joined in to sing.

She graduated in 1939 from Greenfield High School and she was married December 14, 1941 to George E. Jones. To this union one daughter, Janet Louise, was born on February 1, 1943, while George was home on leave from WWII. George was killed in action in France on August 14, 1944. Louise and Janet then moved to Greenfield and Louise rented rooms to school girls while they attended Greenfield High.

Louise then married an old childhood friend, Noble L. Holland, on July 28, 1949, and they all moved to a farm south of Adel. In 1954 they moved back to Adair County to a farm north of Greenfield. She and Noble moved to a farm in Thompson, Iowa, before purchasing their own farm in Whittemore, Iowa. They retired to Greenfield in 1986.

Louise loved her career as a homemaker and was an excellent cook, housekeeper and decorator. Janet recalls telling her mother that even when they moved into a “not so nice house” it didn’t matter because Louise could always make it look pretty. During her farm years she enjoyed preparing noon meals and baking pies for her neighbors during harvest time. She cared deeply for her family and friends, rejoicing in their accomplishments, never wanting the attention for herself, but keeping scrapbooks of their accomplishments. Louise’s hobbies included reading and writing poetry, writing in her many journals recording the family’s cute and witty sayings and keeping scrapbooks of current affairs, cartoons and family gatherings. She loved the mountains, beaches, Iowa cornfields and the Iowa Hawkeyes. She dearly loved the Hawkeyes, but couldn’t watch close games saying many times “why can’t we ever win the big ones?”

Louise worked for the REA prior to her marriage to Noble. During the 1970's she served on the North Central Library Board. She was a member of the Greenfield Immanuel Lutheran Church. While living in Thompson and Whittemore she served on several LWML committees and participated in their bible studies. She was a member of the Stuart Poetry Party Club during her later retirement years.

She was preceded in death by her parents; her husband, George: her husband, Noble; her sister, Hazel; her brothers-in-law, Carl Kingery, Ralph Jensen and Kenny Appenzeller.

To order memorial trees or send flowers to the family in memory of Louise Holland , please visit our flower store.
Send a Sympathy Card