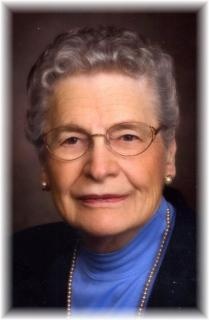 Funeral Services: Will be held on Monday, January 26, 2015, at 11:00 a.m. at the Massena Baptist Church in Massena following a private family burial in the Victoria Township Cemetery, rural Massena.

Open Visitation: Will be held on Sunday, January 25th, from 1 to 6 p.m. at the Steen Funeral Home in Massena.

Family Visitation: The family will greet friends on Sunday, January 25th from 3 to 6 p.m. at the Steen Funeral Home in Massena.

Memorials: In lieu of flowers, memorials are suggested to the area libraries.

Louise Irene McLaren was born July 28, 1919 at Massena, Iowa to Anton and Louise Thomsen Jensen. Louise went home to heaven at the Griswold Care Home, Griswold, Iowa on January 20, 2015 at the age of 95 years, 5 months and 23 days.

Louise's mother passed away when Louise was only five weeks old. After her mother's death, Louise was taken to her mother's cousin's home, George and Anna Hess, for the first two years of her life.

Louise attended elementary school at the country school across the road from the family's home and graduated from Massena High School in 1936. After high school graduation, Louise worked out for people in their homes for two years earning fifty cents a day. Louise attended Simpson College in Indianola, IA for ten weeks, then took teacher exams. She boarded with Pat and Nellie Jennings while teaching seven students at Grand View School for two years.

While teaching at Grand View, Louise first saw her future husband, Kenneth McLaren, when he arrived at the school to pick up his sister. Kenneth and Louise were married May 27, 1943 at her father's home near Massena, Iowa. Louise and Kenneth moved into the farm house where they lived their entire married life. Four children were born to Louise and Kenneth – Carolyn, Leroy, Douglas and David. Louise was a loving wife and mother and worked hard to care for her family. Louise was known as a committed Christian who enjoyed a close and personal relationship with her Savior. The family was actively involved in the Massena Baptist Church, the same church Louise had attended with her family as a child. Kenneth died December 3, 1977.

Following her husband's death, Louise built a house in Massena, Iowa. Many family gatherings, Bible studies and fun activities were enjoyed in Louise's Massena home. Louise always loved to read and while living in Massena, she was active in Friends of the Library. She loved having grandchildren and great-grandchildren visit. Louise loved to bake and was well known for her delicious cinnamon rolls. Later in life, Louise sold her home and moved to an apartment in Atlantic, Iowa where she made new friends, but Massena always remained “home” to her. After her health declined, she moved to the Griswold Care Center where she lived at the time of her death.

To order memorial trees or send flowers to the family in memory of Louise McLaren , please visit our flower store.
Send a Sympathy Card