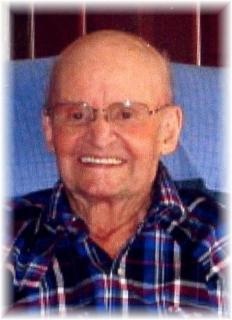 Funeral Services: Will be held on Tuesday, August 26, 2014, at 2:00 p.m. at the Steen Funeral Home in Greenfield with burial in the Greenfield Cemetery. Flag folding ceremonies at the cemetery will be conducted by the Fontanelle American Legion Carlson Post No. 247. Pastor Eric Schubert will officiate the service.

Lowell Dean Aupperle was born September 1, 1923, in Guthrie County, Iowa, the son of Roy and Alta (Hutchins) Aupperle. He passed away on Tuesday, August 19, 2014, at the Greenfield Manor in Greenfield, Iowa, at the age of 90.

Lowell attended country schools primary through eighth grade. He graduated from Adair High School in 1942. He joined the United States Navy and served in the Pacific Area during W.W. II. On July 1, 1954, he was united in marriage to Inez Main in Adair, Iowa. Lowell farmed until moving to Greenfield in 1980. He then worked for S.C.S. and the Greenfield Schools as a janitor. He was a charter member of the Adair V.F.W., a 50 year member of the Fontanelle American Legion Carlson Post No. 247 and a member of the Greenfield United Methodist Church.

He was preceded in death by his parents; brother, Bill Aupperle; three sisters, Audrey Wahlert, Wanda Brown and Joyce Hagen; two brothers-in-law; and one sister-in-law.

To order memorial trees or send flowers to the family in memory of Lowell Aupperle , please visit our flower store.