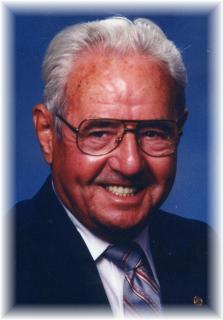 Mass of the Resurrection: Will be held on Friday, October 5, 2012, 10:30 a.m. at the St. John’s Catholic Church in Greenfield with burial in the Fontanelle Cemetery with full military graveside rites by the Fontanelle American Legion Carlson Post No. 247.

Prayer Service: Thursday evening at 7:30 p.m. at the Steen Funeral Home in Fontanelle.

Memorials: To the Alzheimer’s Association.

Loyal attended rural schools in Minnesota and Iowa, graduating from Fontanelle High School in 1937. On June 17, 1939, he was united in marriage with Valda M. Marten. Shortly after, they spent a school year in St. Louis, Missouri, attending the College of Mortuary Science. After graduation he was employed by G.A. Ewing as a licensed embalmer. Later he worked for the Schroeder Funeral Home in Boone, Iowa, prior to entering the Navy in September of 1942.

He served 38 months in the U.S. Navy Hospital Corps attached to the Marines. After qualifying as an Aviation Medicine and Low Pressure Chamber Technician, he was assigned to the Altitude Training Unit of the U.S.M.C. at Quantico, Virginia.

After his discharge in 1945, Loyal was employed by the Laboratory of Physical Biology at the National Institute of Health in Bethesda, Maryland. The next several years were spent at the University of Maryland, from which he graduated with a B.S. in Chemistry. He then returned to N.I.H. and worked on respiratory problems of underwater swimmers for the Office of Naval Research.

Over the next 20 years he was employed by the National Science Foundation, the National Academy of Science and NASA, where his last assignment was that of Program Scientist on the Viking Mission to Mars in 1976.

After retirement he and his wife moved to Fontanelle, Iowa, in 1977. He loved reading, his home, church, family and the great outdoors. He enjoyed gardening and especially loved fishing and hunting as long as health and time permitted.

He served on the Parish Council and Finance Committee of the St. John’s Catholic Church in Greenfield. He was also a lector and choir member in his church. He enjoyed helping and sharing with others. For a number of years he served on the City Council, Enterprise Club, Development Corporation and other community projects. He was an active member in the American Legion Carlson Post No. 247 and the Masonic Lodge.

He was preceded in death by his parents; wife, Valda, in 2010; and sisters Madeline Nelson and Mary Schreck.

He leaves to mourn a son, Michael Goff and wife Nancy, from Edgewater, Maryland, another son, Mark Goff and wife Kathleen of St. Petersburg, Florida; grandsons, Andrew and wife Lauren, Christian, Dan, and Sean and great granddaughter Amy Elizabeth; as well as many friends.

To order memorial trees or send flowers to the family in memory of Loyal Goff , please visit our flower store.
Send a Sympathy Card