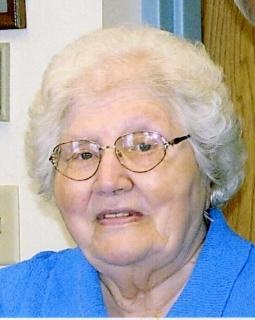 Funeral Services: Monday, November 8, 2010, at 2:00 p.m. at the Emmanuel Lutheran Church in Fontanelle with burial in the Fontanelle Cemetery. Pastor Steven Broers will officiate the service. A luncheon will follow the burial at the church.

Family Visitation: Sunday, November 7th from 5:00 p.m. to 7:00 p.m. at the Emmanuel Lutheran Church in Fontanelle.

Open Visitation: Sunday, November 7th from 2:00 p.m. to 7:00 p.m. at the Emmanuel Lutheran Church in Fontanelle.

Memorials: To the Lucile Raasch Memorial Fund to be established by the family at a later date in care of the Steen Funeral Home, P.O. Box 390, Greenfield, Iowa 50849.

Lucile Katherine (Miller) Raasch, 95,  was born June 4, 1915, to Herman and Maggie (Held) Miller, in Adair County Iowa She was baptized on July 4, 1915 at Emmanuel Lutheran Church, Fontanelle, IA, and on April 1, 1928 was confirmed at Emmanuel, by Pastor Kurtz. She was a life long member of Emmanuel.

She was the youngest of 5 children and an only daughter. In her younger years, her favorite pastime was riding horses. Lucile attended school at Prussia No. 5 until in the 7th grade, when her family moved to town into the home that her Grandma and Grandpa Held built. After moving to town, her parents and brothers ran a dairy and delivered milk to the town people and she helped with the dairy chores. She lived in that home, except for about 3 years, until 2003, when she moved to Summerset Estates and then later to the Good Samaritan Center.

When 20, she married Lee Shannon and Donald Herman, Vinita Joan, and Karen Anne were born. In 1943, she married Russel R Raasch and they became the parents of William Arthur, Rex Russell, Vicki Louise, and Evelyn Ilene.

She belonged to the Emmanuel Lutheran Church Women and held office in that organization for many years and enjoyed her work there. She represented Emmanuel in SIB for 3 years. Her church was very important to her and often shared her strong faith with others, especially her family.

She enjoyed planning large dinners, scripting programs that were given at different times and helping people young and old. Lucile especially enjoyed hosting friends and relatives in her home. Everyone was always welcomed at her dinner table.

She was preceded in death by her parents, husband Russ, son-in-law Harold Mensing, and Great Grandson Zachary Thompson.

To order memorial trees or send flowers to the family in memory of Lucille Raasch , please visit our flower store.
Send a Sympathy Card