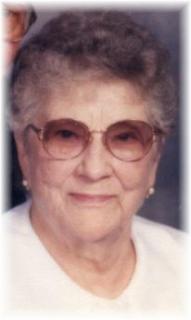 Celebration of Life Services: Will be held on Monday, July 6, 2015, at 10:00 a.m. at the Greenfield United Methodist Church with burial in the Garner Cemetery, Bridgewater, Iowa. Pastor Eric Schubert will officiate the service. The Steen Funeral Home in Greenfield is in charge of the professional arrangements.

Family Visitation: The family will greet friends on Sunday from 3:00 to 5:00 p.m. at the Steen Funeral Home in Greenfield.

Memorials: Memorials may be directed to the family to be determined at a later date.

Lucille Loraine Vorrath was born April 11, 1917, the daughter of Frederick Lon and Lula (Antisdel) Davis in Adair County, Iowa. She passed away on Tuesday, June 30, 2015, at the Greenfield Rehabilitation and Health Care Center in Greenfield, Iowa, at the age of 98.

Lucille was raised near Avondale and lived her entire life in Adair County. She attended rural schools and she was very proud to have received her GED in the mid 1960’s. On November 10, 1935, she was united in marriage to Lawrence Vorrath in the United Methodist Church in Greenfield. To this union two children were born: Gary and Marleta. After their marriage they farmed many years in Adair County until they moved into Greenfield. She started working at the Fontanelle Good Samaritan Society as a CNA and later became a certified med aide. She retired after 35 years of employment and then continued being a companion to one of the residents. She loved going to garage sales and casinos and especially enjoyed her flowers.

She was preceded in death by her parents; husband, Lawrence of 75 years; granddaughter, Teresa McElwee; great granddaughter, Amber Vorrath; and daughter-in-law, Columbine Vorrath.

To order memorial trees or send flowers to the family in memory of Lucille Vorrath , please visit our flower store.
Send a Sympathy Card