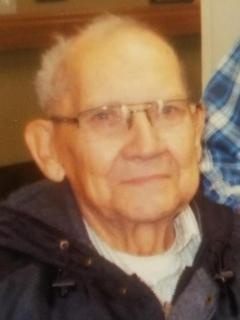 Funeral Services: Will be held on Tuesday, February 13, 2018, at 1:00 p.m. at the Steen Funeral Home in Massena with burial in the Massena Center Cemetery, Massena, Iowa.  Fellowship and refreshments will be held at the Massena Lions/Legion Hall following services at the cemetery. Pastor Grant Van Lishout will officiate the service.

Visitation: The family will greet friends on Monday evening, February 12th, at the Steen Funeral Home in Massena from 5:00 p.m. to 7:00 p.m.

Memorials: Memorials may be directed to the Alzheimer’s Association.

Lyle grew up in the Massena area on his parents’ farm. He graduated for the Cumberland High School in 1945. After he graduated from high school he started farming with his dad. They farmed in the Cumberland area until he retired in 1999. In 1949 he was united in marriage to Jo Ann Hoffman at a Methodist Church in Kansas City, Mo.

Lyle enjoyed raising his family of 2 boys and 2 girls. Tim, Tom, Jill and Teresa. Jo Ann passed away in 2001 and Lyle remarried in 2004 to Sharon Boken. They lived in Atlantic until Sharon's death in 2012.

He served as a trustee for Massena Township for 52 years, on the Massena Coop board for 3 terms and the Farm Bureau board for 2 terms. He also served in the National Guard for 3 years. In his later years Lyle wrote and published 3 songs; "The Church Beside the Road" which was written for the Pine Grove Church's 100th anniversary, "Turn Out the Light" and "Hello Central" which he wrote after the passing of Jo Ann.

To order memorial trees or send flowers to the family in memory of Lyle Shaver , please visit our flower store.