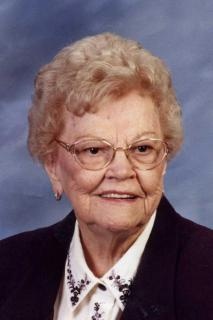 Funeral Services: Tuesday, October 19, 2010, at 11:00 a.m., at the Fontanelle United Methodist Church with burial in the Fontanelle Cemetery. A luncheon will follow the burial at the church.

Family Visitation: One hour prior to services on Tuesday at the church. There will be no open visitation on Monday at the funeral home.

Memorials: In lieu of flowers memorials may be made to the Fontanelle United Methodist Church or the Elkhart Christian Church in care of the Steen Funeral Home, P.O. Box 390, Greenfield, Iowa 50849.

Mable Jane Conley was born October 2, 1912 to John Wesley and Lottie (Lee) Perry in Eureka Township, Adair County. She passed away on Thursday, October 14, 2010, at the Greenfield Manor at the age of 98.

Mable graduated from Fontanelle High School in 1930. After completing normal teacher training she taught in the one room school houses of Eureka #7 and Jefferson #4. In 1937 she married Orval D. Conley. During the next 28 years, they farmed in Eureka and Prussia townships north of Fontanelle. Three daughters were born to this union, Carol, Judith, and Susan. Mable returned to her passion of learning and teaching, graduating from Drake University in 1965. She taught at Dallas Center, Bridgewater-Fontanelle, and North Polk of Alleman. After twenty-three years of teaching, Mable retired to enjoy her family, baking, traveling, quilting, and numerous card games. Mable was a wonderful mother, hard worker, and great teacher. She instilled discipline, respect for others, unselfishness, fairness, and unconditional love to all her family.

Mable was active in 4-H, Eastern Star, Elkhart Women’s Club, and ECC Quilters. She was a member of two churches, the Highland Methodist Church in rural Fontanelle, and Elkhart Christian Church where she had served as elder.

She was preceded in death by her parents; Orval Conley her husband of 38 years in 1975; three brothers; two sisters; and her son-in-law, Mike Miller.

In lieu of flowers, memorials can be made to the Fontanelle Methodist Church or the Elkhart Christian Church.

To order memorial trees or send flowers to the family in memory of Mable Conley , please visit our flower store.