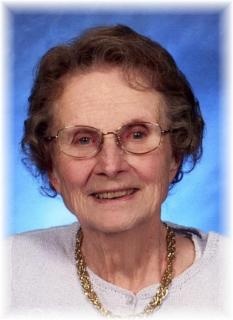 Funeral Services: Will be held on Wednesday, October 8, 2014, at 1;00 p.m. at the Steen Funeral Home in Massena with burial in the Newlons Grove Cemetery, rural Cumberland. A luncheon will be held at the Massena United Methodist Church following the burial.

Open Visitation: Will be held on Tuesday at the Steen Funeral Home in Massena from 2 p.m. to 7 p.m.

Family Visitation: The family will greet friends on Tuesday evening from 5 to 7 p.m.

Memorials: To the Macel Brower Memorial Fund to be established by the family at a later date.

Macel E. Brower was born October 6, 1916, in Cass County, Iowa, the daughter of Levi (Lafe) and Emma (Diers) Westphal. She passed away on Wednesday, October 1, 2014 at the Griswold Care Center in Griswold at the age of 97.

Macel attended country school and Fontanelle High School. She was united in marriage to John Brower on September 1, 1940 at her parental home north of Fontanelle. To this union 2 children were born: David (Janet) Brower and Karon (James) Myers. Scott (Lori) Westphal joined the family at the age of 11 months.

Macel was “Miss Fontanelle” in 1936. Macel was a country school teacher at Eureka No.6 and had the distinct pleasure of teaching her younger brothers. She rode a horse to and from school every day. Macel loved to sew and quilt. She was a long-time member of the United Methodist Church in Massena. Macel was a telephone operator for the Massena Telephone Company. She was proud and honored to serve as co-grand marshal of the July 4, 2011 parade in Massena at the age of 95 along with John Yarger. This wonderful lady was never in a hospital until after her 95th birthday.

Macel and John were campground hosts at Bitterroot Lake near Kalispell, MT for several years. They were well liked and respected by the Montana Fish Wildlife and Parks. During their time as hosts they met people from many countries. Many of which returned for a second visit to their campground.

To order memorial trees or send flowers to the family in memory of Macel Brower , please visit our flower store.