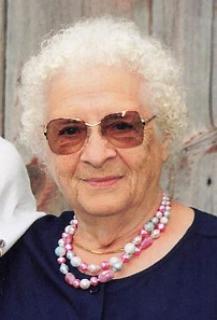 Services: Per Madelene’s wishes her body was donated to Des Moines University for study as was her husbands and there will be no services. The Steen Funeral Home in Fontanelle is in charge of the professional arrangements.

Memorials: Memorials may be directed to the Bridgewater Fire and Rescue or to the Heritage House in Atlantic.

Madelene Ruby (Hepler) McCall passed away on Sunday, March 29, 2020, at the Heritage House Health Care Center in Atlantic, Iowa.  She was one of five children of Stuart and Lena (Rechtenbach) Hepler born on June 30, 1921, in Adair County, Iowa, at the Hepler farm east and north of Fontanelle, Iowa.

Madelene was raised on a farm owned by Dr. Chapman south of Bridgewater in Adams County, Iowa.  There she attended school through the 8th grade.  During that time she worked in different homes doing housekeeping.  In her later years she received her GED diploma.

She met and married Louis Ernest McCall on October 3, 1940, at the Henry Field Seed and Nursery Fall Festival in Shenandoah.  There were 8 couples in all and it was the last group celebration because we were at war.  The minister was Rev. Pearson of Shenandoah.  They couldn’t find work in Iowa so went to Idaho and Oregon for a year or more and worked in fields for 25 cents an hour and thinned apples at Oregon Mesa apple orchard.

Louis was drafted into the Army in 1941 and later given a Medical discharge in 1943.  They settled back in Bridgewater and in September their daughter Ruby was born.  Louis went into trucking and she went most places the truck went.  She raised a big garden and had an apple orchard and was very generous with all the produce.  If you visited her you usually left with a jar of jelly.  She loved to quilt, crochet, embroider and knit.  Many afghans and denim comforters were handed down by her and Dad.

In June of 2014 she moved from their home in Bridgewater to Assisted Living at Heritage House in Atlantic.  She remained there until February 2020 when it was necessary to move down to the Health Center until she passed.

Madelene was preceded in death by her parents; husband, Louis; sister, Wilma; and two brothers, Stuart (Bus) and Robert.

To order memorial trees or send flowers to the family in memory of Madelene McCall , please visit our flower store.
Send a Sympathy Card