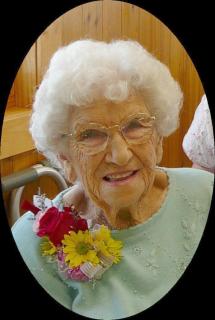 Funeral Services: Will be held on Thursday, January 12, 2012, at 2:00 p.m. at the Greenfield United Methodist Church with burial in the Greenfield Cemetery. Pastor Ted Burnfield will officiate the service. A luncheon will follow the burial at the church.

Visitation: Will be held on Wednesday, January 11th, from 12:00 p.m. to 8:00 p.m. at the Steen Funeral Home in Greenfield with the family greeting friends from 6 to 8 p.m. Wednesday evening.

Memorials: To the Maizie Rice Memorial Fund to be established by the family.

Maizie LaVerne (Richards) Rice was born on December 29, 1918, in Adair County, Iowa, the daughter of Vern and Esther (Dickey) Richards. She passed away on Sunday, January 8, 2012, at the Greenfield Manor in Greenfield, Iowa, at the age of 93.

Maizie was raised and educated in Jefferson Township in Adair County and graduated from Greenfield High School in 1936. Education was always important to Maizie. Her love for learning won her top in the county on eighth grade exams. Maizie continued to excel in high school, even while working for room and board in town, and went on to teach for a short time after she graduated.

On June 12, 1937, she was united in marriage to Audra W. Rice in Greenfield, Iowa. To this union two children were born, Rodger and Joyce. Maizie and Audra farmed all of their married life and lived in the same house all 72 years. Maizie loved her granddaughters and would never turn down a coffee break or a game of Kings in the Corner. She loved cooking, gardening, flowers, and bird watching. Maizie was interested and involved in the family farm right to the end and was constantly amazing people with her memory and sharpness of mind.

Maizie was preceded in death by her husband, Audra; her parents; her brothers, Robert and Roland Richards; and sister, Phyllis Richards.

To order memorial trees or send flowers to the family in memory of Maizie Rice , please visit our flower store.
Send a Sympathy Card