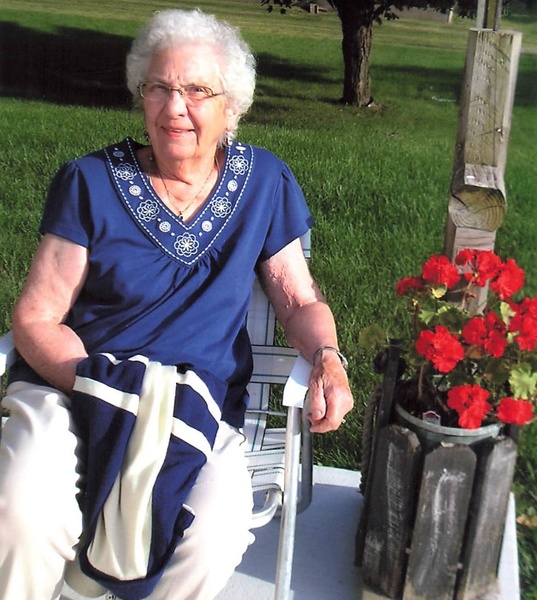 Marcella Patricia (Retz) Platt passed away on January 18, 2022, at the Caring Acres Nursing and Rehab Center in Anita IA at the age of 96. Marcella was born January 17, 1926, to Emil T. and Anna Christena (Nimm) Retz in Atlantic IA.

Marcella attended Benton #7 country school and graduated from Wiota High School in 1943 as valedictorian. Following high school, she worked at the Atlantic State Bank. On February 18, 1947, Marcella was united in marriage to Jack D. Platt in Wiota IA. They were the parents of Linda, Don and Randy. Jack and Marcella farmed southeast of Massena until 1978 when they moved to Massena. Marcella was a life-long resident of Cass County.

Marcella attended the Massena United Methodist Church and was a member of Rose Garden Club, Crazy 8 card group, and Friends of the Library. She was a 4-H leader, delivered Meals on Wheels, and volunteered as a Red Cross Bloodmobile coordinator for over 25 years.
Marcella enjoyed sports. She participated as a member of the Wiota girls high school teams that played in 3 Iowa state basketball tournaments and she enjoyed following the Iowa Hawkeyes. Her love of sports continued through the years in watching the four grandsons play ball and following son, Randy, and the teams that he coached. Marcella also found time for quilting, gardening, big band dances and playing card games. Family always looked forward to dinners at Gram's house as she was a wonderful cook. Freezing sweet corn in the summer was a family affair.
She was preceded in death by husband, Jack (2002), her parents, and a stillborn daughter; son-in-law Larry Stroud; brothers and sisters-in-law, Bill and Linda Retz, Jack and Barb Retz and sister-in-law, Betty Retz.
Surviving Marcella are her children, Linda Stroud, Papillion NE, Don and wife Kris, Massena, and Randy, Council Bluffs; grandchildren: John Stroud and wife Tina, Ponca NE, Mark Stroud and wife DeAnne, Omaha NE, Joe Platt, Massena and Cody Platt and wife Stacey, Massena; 14 great-grandchildren; brother, Richard Retz, Glenwood; nieces, nephews, cousins and friends.
Marcella's family wishes to express their gratitude for the acts of kindness shown to them during this time. The family is grateful to the staff at the Caring Acres Nursing and Rehab Center for their care of Marcella. Thanks also to the Hospice of the Midwest staff for their visits and time spent with Marcella.

To order memorial trees or send flowers to the family in memory of Marcella Platt, 96, of Massena, please visit our flower store.

Burial will follow in the Victoria Township Cemetery, south of Massena.