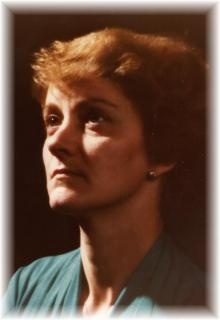 Memorial Gathering: The family will greet friends at the Steen Funeral Home in Greenfield on Saturday, July 14th, from 2:00 p.m. to 4:00 p.m.

Memorials: To the Mic Wilson memorial fund to be established by the family.

Marcella “Mic” Irene Brockman, was born October 11, 1944 in Johnson County Iowa, to Manuel and Rosella Brockman; she was the adopted daughter of Paul and Amelia Brockman of Greenfield, Iowa. Mic passed away July 5th, 2012 at the Good Samaritan Nursing home in Fontanelle, Iowa at the age of 67.

Marcella graduated Greenfield High School in 1962. She accomplished many things during her lifetime; she worked in the insurance industry her entire life including 27 years at Equitable of Iowa and 7 years at Adair County Farm Bureau. She took part in the Movie Cold Turkey as an extra and worked many months for the production crew. She was secretary and treasurer for the Iowa Hawkeye Horseshoe Pitching Association (IHHPA), and involved in American Women Business Association (AWBA) for many years as well as the Iowa Women Bowling Association. Mic loved to play golf, read, collect lighthouses and dolls and do needle crafts, but her greatest love was her family.

In 1962 Marcella married Dean Greenwalt of Greenfield Iowa. To this union three children were born: Misty, Deana, and Dan Greenwalt.

In 1971 Marcella was united in marriage to Donald Lyle Wilson. To this union brought four step children: Robert “Bruce”, Donald L Jr., Ellis “Sonny”, and Shirley, and one son Paul.

To order memorial trees or send flowers to the family in memory of Marcella Wilson , please visit our flower store.