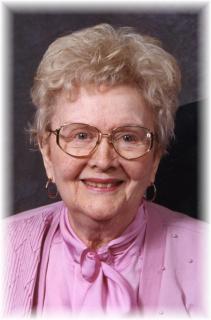 Memorials: To the Greater Regional Hospice or the Parkinson’s Foundation.

Margaret Alvena Holaday was born July 30, 1919, in Hamburg, Iowa, the daughter of C.A. and Alvena (Karstens) Welch. She passed away on Friday, April 27, 2012, at the Greenfield Manor in Greenfield, Iowa, at the age of 92 under hospice care.

Margaret came to Greenfield as a small child and was often a guest of Mrs. E.E. Warren because of her father's association with Mr. Warren. Margaret attended Greenfield Public Schools and graduated with the class of 1937. She then graduated from American Institute of Business (AIB) in Des Moines, Iowa. On March 9, 1941, she was united in marriage to Laurence A. Holaday at the home of her parents in Greenfield.

Margaret worked for Adair County Abstract for four years and then worked in offices in El Paso at Fort Bliss, Texas and at Fort Ord in Salinas, California. When she returned to Greenfield, she worked for the Extension Services in the Farm Bureau building. Laurence and Margaret operated the Holaday Hatchery in Greenfield for thirty-two years, retiring in 1977.

Margaret enjoyed her clubs. She was a member of the Order of Eastern Star for over fifty years. She enjoyed bridge clubs and foursomes and belonged to Wednesday afternoon club in her younger years. She enjoyed visiting with friends and relatives and traveling, spending many winters in Texas and Arizona. In December of 2004, Laurence and Margaret relocated their home to an Assisted Living apartment at the Greenfield Manor.

She was preceded in death by her parents and husband, Laurence in 2009.

To order memorial trees or send flowers to the family in memory of Margaret Holaday , please visit our flower store.
Send a Sympathy Card