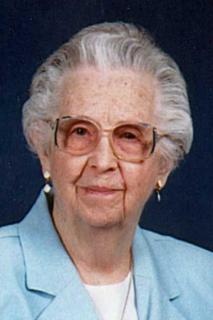 Margaret Luella Jensen Smith, daughter of Jens Christian and Laura DeMila Wright Jensen was born on the family farm 7.5 miles east of Greenfield, Iowa on October 6, 1914. She passed away on February 12, 2011 at Greenfield Manor.

She attended Grand River No. 2 country school in Adair County, Iowa. She earned her GED in 1967. On February 14, 1934 she was married to Norral L. Smith and to this union six children were born, James L., Shirley Louise, Sharon Kay, Robert Eugene, Connie Jean, and Ronnie Dean.

Norral and Margaret were engaged in farming. Margaret was also a homemaker. She was well known as a baker and cooked at a number of eating establishments. Margaret was active in 4-H as a young girl and also as a 4-H leader. She was active in the United Methodist Churches in Greenfield, Stuart, Corning and Orient, Iowa. She had been an active member of Mary Circle in the Church. Some of her hobbies and interests included her Church, Bible Study, Prayer Meetings, family, playing cards and cooking. Later in life she contacted family and friends by e-mailing and enjoyed reading Facebook articles about family and friends.

Margaret was a loving mother and truly enjoyed having her children, grandchildren and great-grandchildren around her. She will be greatly missed by her family.

She is survived by three sons, Jim and wife Betty, Bob, and Ron all of Greenfield: three daughters, Shirley Jensen and husband Wayne of Atlantic, Sharon Sorensen and husband Roger of Corning, and Connie Nolan and husband Paul of Sioux City.

To order memorial trees or send flowers to the family in memory of Margaret Smith , please visit our flower store.