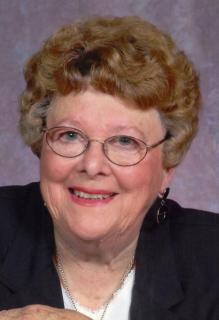 Mass of Christian Burial: Will be held on Friday, August 19, 2016, at 10:00 a.m. at the St. Patrick’s Catholic Church in Massena. A luncheon will be held at the church immediately following the burial. Father Mike Berner will officiate the service.  The Steen Funeral Home of Massena is in charge of arrangements.

Family Visitation: The family will greet friends on Thursday evening from 5:00 p.m. to 7:00 p.m. at the St. Patrick Catholic Church in Massena.

Prayer Service: A scripture/prayer service will also be held on Thursday evening at 6:00 p.m. at the St. Patrick Catholic Church in Massena.

Memorials: In lieu of flowers memorials may be directed to the Marian Amdor memorial fund to be established by the family at a later date.

She graduated from Massena High School where she met her future husband, Eugene (Gene) Amdor. They were married on February 22, 1944. To this union seven children were born: Bill, Elaine, Rita, Jim, Sheila, Tom and Mike. As you might think Marian was a busy wife and mother. She put in a huge garden every spring and spent the summer canning and freezing the bounty to feed the family. She also raised many chickens as broilers which meant lots of fried chicken the rest of the year. Marian loved flowers too and had lots of them growing around the farm. She was a terrific cook and could whip up a delicious meal no matter what was in the kitchen. Besides all that she sewed for the children as they were growing up, helped with their 4-H activities and helped Gene when she could. She was an original independent woman because she could do just about anything that she needed to do and along with Gene they passed that on to their children.

Marian has a beautiful singing voice and sang at many events in the community. She was the voice of "God Bless America" during the Little Britches Rodeo when it was held in Massena.

She was a long time member of St. Patrick's Catholic Church in Massena and was involved as a member of the Altar Society. Marian was always willing to help wherever she could.

One of the hardest things Marian had to face was the loss of her daughters, Elaine in 2004 and Sheila in 2006. She was also preceded in death by her husband Gene, parents, grandparents, aunts, uncles and many other relatives.

To order memorial trees or send flowers to the family in memory of Marian Amdor , please visit our flower store.
Send a Sympathy Card