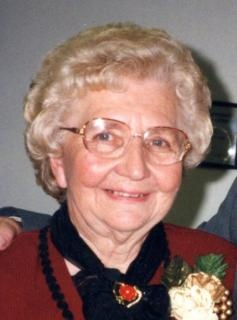 Funeral Services: Will be held on Wednesday, February 19, 2020, at 10:00 a.m. at the Fontanelle United Methodist Church with burial in the Eureka Center Cemetery, north of Fontanelle.  A luncheon will be held at the church following the committal services at the cemetery.

Memorials: Memorials may be directed to Marie Lents memorial fund to be established by the family at a later date.

Marie D. Lents was born February 27, 1931, in Anita, Iowa, the daughter of Avery and Erma (Marsh) Stephenson.  She passed away on Wednesday, February 12, 2020, at the Good Samaritan Society in Fontanelle, Iowa, at the age of 88.

Marie grew up in Anita and attended grade school thru 8th grade in Anita.  She graduated from Adair High School in 1949.  On December 29, 1949, she was united in marriage to Donald Lents in the Adair United Methodist Church.  To this union four children were born: Ralph, Dale, Wayne and Cathy.  They moved to their farm in Eureka Township in 1959 and farmed until moving into Greenfield in the spring of 2005.

She was preceded in death by her parents; brothers, Max and Rex Stephenson; three half-brothers, Earl, Ross, and Cecil Stephenson; brother in law, Carson Griffith; two nephews, Ronald and Alan Stephenson; and a half-sister in infancy.

To order memorial trees or send flowers to the family in memory of Marie Lents , please visit our flower store.
Send a Sympathy Card