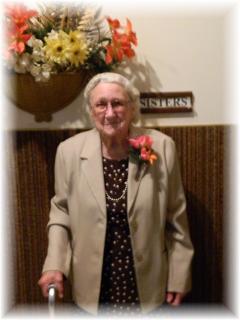 Funeral Services: Will be held on Monday, January 7, 2013, at 10:30 a.m. at the St. Peter’s United Church of Christ south of Massena with burial in the Victoria Township Cemetery. Pastor James Hansen will officiate the service. A luncheon will follow the burial in the Cumberland Community Building in Cumberland.

Family Visitation: Will be held on Sunday, January 6th, from 2 to 4 p.m. at the Steen Funeral Home in Fontanelle.

Memorials: To Marietta Holste memorial fund to be established by the family.

Marietta Holste was born May 6, 1921, in Clearwater, Minnesota, the daughter of Leslie Clifford and Cora Edna (Roberts) Miller. She passed away on Wednesday, January 2, 2013, at the Salem Lutheran Home in Elk Horn, Iowa, at the age of 91.

Marietta grew up in Minnesota and Iowa and graduated from Adair High School in 1940. She taught school the following year, 1940-1941. On June 10, 1941, she was united in marriage to Erwin Edward Holste in the First Reformed Church in St. Joseph, Missouri. They farmed in the Massena and Bridgewater area for a number of years. After their marriage she joined the St. Peter’s United Church of Christ south of Massena.

Marietta worked in Greenfield at the Maid-rite as a cook for a number of years. She opened her own restaurant in Bridgewater, The Bridgewater Café. She worked at Berning’s in Creston before she retired. After retiring she enjoyed traveling with her friend Mary Ann Warnaca. She enjoyed attending the family reunions. She loved to quilt and she made numerous quilts for her children and grandchildren all by hand.

She was preceded in death by her parents; husband, Erwin Holste; son, Carl Holste; and son-in-law, Richard Hansen.

To order memorial trees or send flowers to the family in memory of Marietta Holste , please visit our flower store.
Send a Sympathy Card