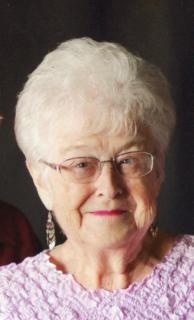 Celebration of Life Services: Will be held on Wednesday, October 2, 2019, at 10:30 a.m. at the First Baptist Church in Cumberland, Iowa with burial at a later date in the Greenwood Cemetery, Cumberland, Iowa. A luncheon will follow the service at the Cumberland Community Building.

Family Visitation: The family will greet friends on Tuesday evening from 5:00 p.m. to 6:30 p.m. at the Steen Funeral Home in Massena.

Memorials: Memorials may be made to the First Baptist Church in Cumberland.

Marilee June South passed away Friday, September 27th, 2019, at the Greenfield Rehabilitation Center, surrounded by her loving family. Marilee June Lacey was born on June 26, 1933 at the family farm home near Cumberland, to Gilbert Elton Lacey and Esma Ruth Mills Lacey. She attended Crossroads School until 8th grade then graduated from Cumberland High School in 1951, after which she worked for Bell Telephone in Atlantic.

On December 14, 1951, she married Ronald Clair South at her parent’s farm home. The couple worked in California for a short time. After returning to Iowa, Marilee was a homemaker and mother to 4 children; Ronald Lee born in 1953, Vicki Jo (Morrison) born in 1955, Connie Jean (Henkenius) born in 1957 and Cody Allen born in 1963.

Marilee was active in 4-H as a member and later as a leader. She was a member of the First Baptist Church of Cumberland and served as Sunday School teacher, Awana Leader, Pianist, and Organist and assisted in various youth groups and Vacation Bible School activities. She put her faith in Jesus Christ at an early age and reaffirmed her salvation early in adulthood.

She was also a Cub Scout Den Mother, worked for Helen Denham’s grocery store, was the Food Supervisor, Head Cook and drove a van for the Cumberland & Massena School District. In her spare time, she assisted with farm chores, baked and decorated wedding, birthday and graduation cakes and taught cake decorating in area towns.

Marilee loved cooking and sewing and especially enjoyed spending time with her husband, 4 children, 12 grandchildren and 23 great-grandchildren. She relished the time spent wintering in Mesa, Arizona at the Aztec Trailer Resort in their park home, attending and playing the piano for the Aztec Fellowship, and interacting with fellow members of the resort.

Frequently, people would stop to visit Clair to inquire about horses or grandchildren and their friends would stop to visit and she would prepare a full meal at a moment’s notice. She also raised a huge garden from which she fed her family and readily shared with anyone who wanted produce. She excelled at cooking and teaching her grandchildren how to make fried chicken, decorating cakes, dressing chickens, freezing corn, and making strawberry jam. She was well known for baking daily batches of cinnamon rolls and coffee cakes, many of which brought high dollar at benefits.

She was preceded in death by her parents, Gilbert Sr. and Esma Lacey, brothers Gilbert Jr. and Roger, (in infancy), sisters-in-law Jean Lacey and Peggy Lacey, in-laws Wilbur South and wife Geneva, and sister-in-law Shirlene South.

To order memorial trees or send flowers to the family in memory of Mariliee South , please visit our flower store.