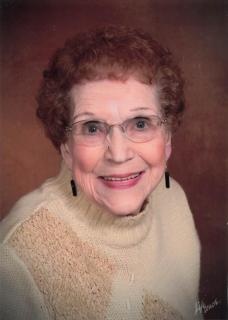 Public Memorial Services: There will be a brief memorial service for Marilyn Ehrsam at the Greenfield Cemetery at 11:00 a.m. on Saturday, May 29, 2021. Pastor Steven Broers, from the Emmanuel Lutheran Church in Fontanelle, will officiate the service. A light lunch will be served at the church following the service. In case of inclement weather, the service will be held at the church. The Steen Funeral Home in Greenfield is in charge of the professional arrangements.

Memorials: Memorials may be directed to the E.E. Warren Opera House in Greenfield or to the Greenfield Public Library.

When Marilyn was a sophomore in high school, the family moved to Greenfield, IA. She graduated from Greenfield High School, where she was known as “Legs Johnson,” in 1944. After graduation she worked at the Fitch Shampoo Company in Des Moines. But someone in Greenfield was calling her back. On December 28, 1946, Marilyn was united in marriage to Robert Ehrsam and they resided in Greenfield their entire marriage. To this union they were blessed with four children: Ann, Patricia, Sue, and James. Robert was active in the American Legion, while Marilyn became involved with the Legion Auxiliary, holding offices at the local, county and state levels. Robert and Marilyn loved to dance and could be found on the dance floor at various places around the area. They enjoyed traveling and were fortunate to be able to visit Robert’s ancestors’ farm in Germany. A self-taught cake decorator, Marilyn worked for a time in the bakery at Berg’s grocery store. She was also a CNA and worked at the Adair County Hospital in various capacities. She was active with TOPS of Iowa, Red Hat Society, and her sewing club. She especially loved coffee time with her friends at various locations around town each weekday. She was an active member of Emmanuel Lutheran Church in Fontanelle.

Marilyn is survived by her children, Ann McGowan of Johnston, Patricia (Richard) Hogan of Marion, Sue Rohner of Greenfield, and James (Daveane) Ehrsam of Greenfield; 7 grandchildren; 16 great grandchildren; one great great granddaughter; two sisters, Norma Donnellan of Greenfield and Eleanor Bricker of Waukee; one brother, Hans Johnson of Broken Arrow, OK; and many nieces and nephews.

Marilyn will be remembered as a loving wife, mother, and grandmother, a great dancer, an avid joke teller, a tasty mint maker, and a beautiful cake decorator. She will be greatly missed by her family and many friends.

To order memorial trees or send flowers to the family in memory of Marilyn Ehrsam , please visit our flower store.