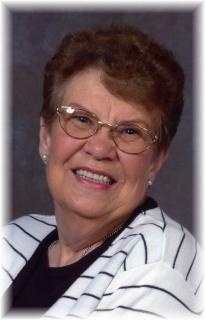 Private Family Services will be held at a later date. The Steen Funeral Home in Greenfield is in charge of the professional arrangements.

Memorials: To the Marilyn Harter memorial fund to be established by the family at a later date.

Marilyn Joan Harter was born on September 24, 1936, in Adair County, Iowa, the daughter of Frank Dewey and Mildred Estella (Brown) Sevier. She passed away on Monday, January 21, 2013, at the Greater Regional Hospice Home in Creston, Iowa, at the age of 76.

Marilyn was raised in Greenfield and graduated from Greenfield High School in 1956. She was united in marriage to Bill Harter on August 16, 1955, in Avoca, Iowa. To this union two children were born: Rod and Valerie. They lived all of their married life in Greenfield in their current home, an old school house that was moved into town from the Stanzel area.

Marilyn worked at the Greenfield Bowl and Carlson’s Super Value for several years. She enjoyed camping, swimming, going on long car rides, her casino get aways and especially watching her grandchildren’s sport activities.

She was preceded in death by her parents.

To order memorial trees or send flowers to the family in memory of Marilyn Harter , please visit our flower store.
Send a Sympathy Card