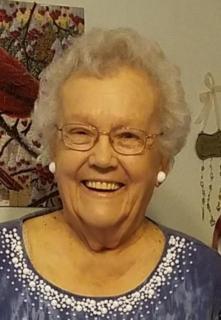 Funeral Services: Will be held on Monday, December 16, 2019, at 10:30 a.m. at the Emmanuel Lutheran Church in Fontanelle with burial in the Fontanelle Cemetery. A luncheon will be held at the church following the committal services at the cemetery. Pastor Steven Broers will officiate the service. The Steen Funeral Home in Fontanelle is in charge of the professional arrangements.

Memorials: Memorials may be directed to the Fontanelle Public Library or to the Adair County Memorial Hospital in Greenfield.

Marilyn Marguerite Jacobson was born March 24, 1932, in Fontanelle, Iowa, the daughter of Clarence and Caroline (Burg) Kriens. She passed away on Thursday, December 5, 2019, at the Mercy One Hospice in Johnston, Iowa, at the age of 87.

Marilyn was raised in Fontanelle and graduated from Fontanelle High School in 1949. On January 29, 1950, she was united in marriage to Ramon Jacobson in the Congregational Church in Fontanelle. To this union six children were born: Clark, Michael, Beverly, Brad, Brian and Jan. They lived in Fontanelle from 1951 until 1975 when they moved to Lacona, Iowa. In 1991, Ramon retired and they returned to their home in Fontanelle.

Marilyn was a member of the Emmanuel Lutheran Church, had served on the board at the Adair County Memorial Hospital in Greenfield, enjoyed Thursday morning coffee at the Fontanelle Library and her quilting clubs. She especially enjoyed her family-grandkids, great granddaughters, friends, sewing, quilting and crocheting.

She was preceded in death by her parents and son, Michael Jacobson.

To order memorial trees or send flowers to the family in memory of Marilyn Jacobson , please visit our flower store.
Send a Sympathy Card