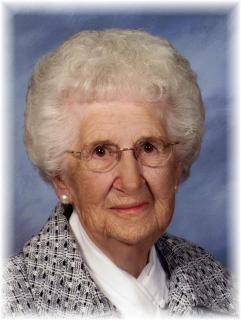 Funeral Service: Will be held on Tuesday, September 23, 2014, at 11:00 a.m. at the Bridgewater United Methodist Church with burial in the Garner Cemetery, Bridgewater, Iowa. Pastor Laurel Westerkamp will officiate the service.

There will be no public visitation.

Memorials: May be directed to the Bridgewater United Methodist Church.

Marjorie Mable Ford was born June 25, 1916, the daughter of John and Sarah (Montgomery) Alloway in Adair County, Iowa. She passed away on Friday, September 19, 2014, at the Eastern Star Masonic Home in Boone, Iowa, at the age of 98.

Marjorie was raised and grew up north of Fontanelle. She graduated from Greenfield High School. After high school she taught country school for six years. On June 1, 1940, she was united in marriage to Lawrence Ford in Greenfield, Iowa. To this union three children were born: Judy, Nancy and Roger. They lived all of their married life on the Ford homestead west of Bridgewater. She resided the last four years in the Eastern Star Masonic Home in Boone.

Marjorie was a homemaker, wonderful cook, enjoyed gardening, attending her grandchildren’s activities, was very active in her church, was very particular about her yard and enjoyed ballroom dancing with Lawrence and was a very kind neighboring person.

She was preceded in death by her parents; husband, Lawrence in 1984; son-in-law, Donald Erickson; two brothers, Merle and Marion Alloway; and sister, Athel Cavanaugh.

To order memorial trees or send flowers to the family in memory of elinore livingston , please visit our flower store.