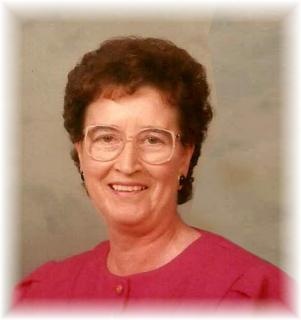 Funeral Services: Will be held on Saturday, January 24, 2015, at 11:00 a.m. at the Massena United Methodist Church in Massena with an Eastern Star Service by the Greenfield Chapter No. 91 Order of Eastern Star. Interment will be in the Massena Center Cemetery. Pastor Laurel Westerkamp will officiate the service. A luncheon will be held at the church following the services at the cemetery.

Family Visitation: The family will greet friends on Friday evening from 5:30 p.m. to 7:30 p.m. at the Steen Funeral Home in Massena.

Marjorie Ann Johnson was born July 3, 1933, north of Cumberland at her parents’ home, the daughter of Harry and Ruby (Moler) Edwards. She passed away on Sunday, January 18, 2015, at the Greenfield Nursing and Rehabilitation Health Care Center in Greenfield, Iowa, at the age of 81.

Marjorie grew up in Massena, Iowa and graduated from Massena Independent School. On August 16, 1952, she was united in marriage to Richard “Dick” Johnson in the Massena United Methodist Church. To this union two children were born: Mark and Debra. They lived in Massena most of the marriage until 2012 when they moved to Greenfield. Marjorie worked for Sinclair Station in Massena, Economy Food Market, Johnson Service Station and served as the Ward Clerk at the Cass County Memorial Hospital in Atlantic retiring in 1998 after 22 years.

The family of Marjorie Johnson wishes to express their gratitude for all acts of kindness shown to them in their time of sorrow and invites you to join them for a luncheon at the church following the committal services at the cemetery.

To order memorial trees or send flowers to the family in memory of Marjorie Johnson , please visit our flower store.