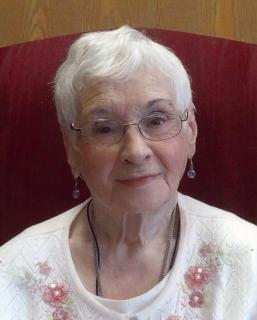 Celebration of Life Services: Will be held on Saturday, May 7, 2016, at 11:00 a.m. at the United Methodist Church in Greenfield with burial at the Greenfield Cemetery. Pastor Eric Schubert will officiate the service. A luncheon will be held following the committal services at the church.

Family Visitation: The family will greet friends on Friday, May 6th, from 5:00 to 7:00 p.m. at the Steen Funeral Home in Greenfield.

Marjorie Josephine Porter was born on July 1, 1922 on a farm south of Dexter, Iowa. She was the daughter of Charles W. and Georgia E. (Howard) Beaman. She received her education in Adair County rural schools and graduated from Greenfield High School in 1940.

Marge and Dean Roberts were married on March 11, 1941. They lived in Greenfield until Dean was drafted into the Air Force. During WW II she lived in the Greenfield area with her infant son, Gary Dean Roberts, who was born on November 30, 1943. When Dean returned from the service they moved to Bridgewater, Iowa. On April 29, 1947 a daughter, Linda Elaine, was born. In 1951 they moved to Greenfield. During the Korean Conflict they spent several months in Cotuit, Massachusetts while Dean trained for military service. When he was sent to Korea Marge and the children returned to Greenfield. Dean passed away in 1970. On June 29, 1984 Marge married Dick Porter. In 1998 Dick and Marge moved to the Homestead in Greenfield. After Dick died in 2000 Marge continued to live in the Homestead until health issues resulted in a move to Greenfield Manor. She passed away on March 30, 2016.

Marge has been a member of the Greenfield United Methodist Church, UMW (United Methodist Women) and Greenfield Legion Auxiliary for over 50 years. She has shown her love of children by being a church school teacher and baby sitter over the years. Marge worked for several years for local grocery stores. She enjoyed playing cards, traveling and spending time with family. The grandchildren looked forward to her homemade chicken and noodles.

To order memorial trees or send flowers to the family in memory of Marjorie Porter , please visit our flower store.
Send a Sympathy Card