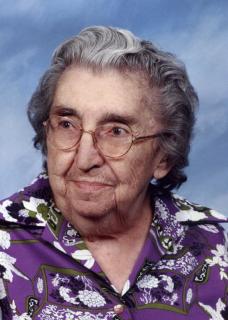 Graveside Services:  10:30 a.m., Monday, August 23, 2010, at the Carl Cemetery in Carl, Iowa with a luncheon to follow at the Carl United Methodist Church

Marjorie Eleanor Tucker was born on October 15, 1920 in Cass County, Iowa to Fred and Elizabeth (Warrior) Stuva.  She passed away at the age of 89 at the Good Samaritan Center in Fontanelle on August 20, 2010.

Marjorie was raised around and attended school in Bridgewater, Iowa. On September 10, 1938, she was united in marriage with Roe “Bill” Tucker in Maryville, MO. Four children were born to this union, Virginia, Judy, Lewis and Jannis.

During their marriage Bill and Marjorie farmed south of Bridgewater.

After their retirement in 1988, they moved to Prescott.  Bill passed away in March of 1989 and Marjorie remained in their home until 2006. She then went to live with her daughter Judy and family in Council Bluffs. Later she resided in assisted living centers in Council Bluffs and Lenox before moving to the Good Samaritan Center in Fontanelle in July 2007.

Marjorie enjoyed the farm life and raising her chickens and large garden.

She took pride in making homemade wine and sharing with her family, friends, and neighbors.  She especially enjoyed when her grandchildren came to play cards or to go hunting.

She was preceded in death by her parents, husband, a sister in infancy, and sisters Beulah Liston of California and Betty Westphal of Fontanelle, brother-in-law James “Toad” Billingsley of Prescott, and son-in-law Gene Dillon of Greenfield.

To order memorial trees or send flowers to the family in memory of Marjorie Tucker , please visit our flower store.
Send a Sympathy Card