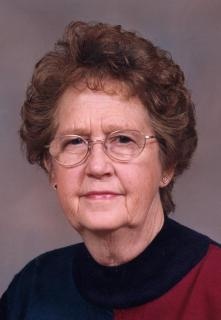 Mass of Christian Burial: Will be held on Friday, February 3, 2017, at 10:30 a.m. at the St. John’s Catholic Church in Greenfield with burial in the Greenfield Cemetery. A luncheon will be held at the church following the committal services at the cemetery. Father Ray Higgins will officiate the service.

Family Visitation: The family will greet friends on Thursday evening from 5:00 p.m. to 7:00 p.m. at the Steen Funeral Home.

Prayer Service: Will be held on Thursday at 7:00 p.m. at the Steen Funeral Home in Greenfield.

Memorials: Memorials may be directed to the Martina Breheny memorial fund to be established by the family at a later date.

Martina Louise Breheny was born December 18, 1925, the daughter of John and Anna (Spain) O’Brien south of Stuart in Adair County, Iowa, near Port Union. She passed away on Monday, January 30, 2017, at the Community Care Center in Stuart, Iowa, at the age of 91.

Martina was educated at country schools in Adair County and graduated from Menlo High School with the class of 1943. Martina lived in San Francisco and Lawrence, Kanas during World War II while her family members were stationed there with the coast guard. On April 19, 1947, she was united in marriage to Vincent D. Breheny in Casey, Iowa. To this union seven children were born: Mary Ann, Teresa, Patricia, Kathleen, Regina, Phyllis and John. They farmed northeast of Greenfield until 1985 when they retired to Greenfield. Martina enjoyed farm life raising their children-having a big garden, canning, raising chickens, sewing for her children and helping them with their 4-H projects.

Martina was very faith-filled and proud of her Irish, Catholic heritage. She got to travel after retiring and made her trip of a “lifetime” when going to Ireland. She got to visit a distant cousin. She was a devoted caregiver to her daughter, Mary Ann.

To order memorial trees or send flowers to the family in memory of Martina Breheny , please visit our flower store.