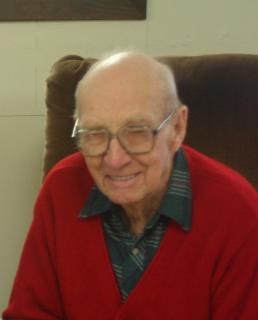 Marvin Westphal passed away on Sunday, June 19, 2011, at the Good Samaritan Society in Fontanelle, Iowa.

Funeral Services: Thursday, June 23, 2011 at 10:30 a.m. at the United Methodist Church in Fontanelle with burial in the Fontanelle Cemetery.

Family Visitation: Wednesday, June 22nd, from 5 to 7 p.m. at the Steen Funeral Home in Fontanelle.

Memorials: To the Marvin Westphal memorial fund to be established by the family.

Marvin attended Highland Country School and Fontanelle High School. He was united in marriage to Marie Bricker on December 22, 1941, in Greenfield, Iowa. To this union five children were born: Cecelia (Sue), Marvin L., Jr., Annette, Chris, and Jeffrey. He served his country in the U.S. Army for four years during WW II. In 1946, the family moved to their farm north of Canby. Marvin and Marie continued to live on the farm until 2004 when they moved to Fontanelle.

Marvin was a farmer and saw the transition of farming from picking corn by hand to the modern technology used today. He had a good eye for beauty and nature. He enjoyed his sweet corn and melon patches. He enjoyed traveling and family gatherings. Marvin always liked to tell a good story and leaves memories of many 'Marvinisms'. He was a member of the United Methodist Church and worshipped at Highland Methodist Church until its closure.

To order memorial trees or send flowers to the family in memory of Marvin Westphal , please visit our flower store.