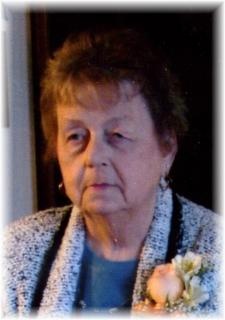 Funeral Service: Will be held on Saturday, October 13, 2012, at 11:00 a.m. at the Bridgewater United Methodist Church with burial in the Garner Cemetery, Bridgewater, Iowa. Pastor John Greenlee will officiate the service.

Family Visitation: Will be held at the church one hour prior to services on Saturday and on Friday evening at the Cutler-O’Neil Funeral Home in Council Bluffs from 5 to 7 p.m. The Steen Funeral Home in Greenfield is in charge of the professional arrangements.

Memorials: To Mary Ann Brown memorial fund to be established by the family.

Mary Ann Brown, age 82, passed away at Regency Rehabilitation and Skilled Nursing Center on October 9, 2012. Mary was born in Des Moines, IA on February 6, 1930 to Harold and Susan (Seley) Shinn.

Mary worked at Brandies fore several years in the 1960's and later began to sell Stanley Products until she branched out to sell Tupperware, which Mary received a lot of bonuses and was able to have her own team of girls under her. After retirement, she moved to Greenfield, Iowa, where she and Loren (Tuff) served Meals on Wheels for a lot of years and did benefit work for the town of Greenfield.

After several years Mary and Loren moved back to Council Bluffs to finish out their retirement and be with their children.

To order memorial trees or send flowers to the family in memory of Mary Ann Brown , please visit our flower store.