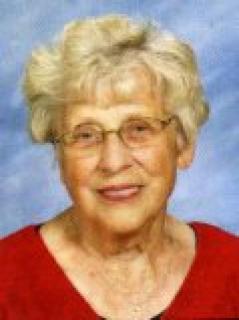 Mass of Christian Burial: Will be held on Monday, March 7, 2016, at 10:30 a.m. at the St. John’s Catholic Church in Greenfield with burial in the Greenfield Cemetery. Father Ken Gross will officiate the service. A luncheon will follow the burial at the church. Online condolences may be left to the family at www.steenfunerals.com.

Family Visitation: The family will greet friends on Sunday from 4 to 6 p.m. at the St. John’s Catholic Church.

Mary LaVonne Bricker was born November 11th, 1923 to Walter LeRoy Jeffryes and Mary Ann Hoffman Jeffryes in Greenfield, Iowa. She passed away on Thursday, March 3, 2016, at the Iowa Methodist Medical Center in Des Moines, Iowa, at the age of 92.

Mary graduated from Greenfield High School in 1941. She attended the University of Iowa, receiving her BSN degree in nursing. In her last year of nursing school, she joined the Nurse’s Cadet Corp. Upon graduation, she was employed as an Assistant Supervisor of the Medical Wards at the University of Iowa Hospital.

In 1946, she married John Jr. Bricker at St. Thomas Moore Chapel in Iowa City, Iowa. To this union, they were blessed with 11 children. After John’s completion of his pre-veterinary courses, they moved to Ames, Iowa. Mary was employed as an OB nurse at Mary Greeley Hospital while living in Ames.

In 1951, they moved to Greenfield, Iowa with their four children. Mary became a homemaker raising all of their children and working with the Girl and Boy Scouts organization. After 15 years, she re-entered nursing. First, she was an educator for rural nurses employed by the University of Iowa. She then worked as an Adair County Public Health nurse; a staff nurse at Broadlawns Hospital in Des Moines, Iowa; and later as a staff coordinator at Atlantic Memorial Hospital for 19 years. While coordinator, she started the coronary care course and pre-natal classes on breathing and relaxation techniques for women in labor. During this time, Mary wrote a continuing education manual to gain approval from the Iowa Board of Nursing to award continuing education units to employees at the Atlantic hospital.

During her professional years, she was a member of the Atlantic RN Club, ISHMET and Southwestern’s in-service organizations. She was active in Church Women United, holding state offices as Vice President and Area Chairperson. She was a cancer volunteer, presenting programs to schools and clubs. Mary was a member of St. John’s Church, holding office as President of the Catholic Women Group and catechist for a number of years. She also was Vice President and President of the State Council of Catholic Women.

In her free time, Mary enjoyed watching things grow and maintaining the vegetable and flower garden started by her husband. She often listened to light classical music and enjoyed dancing on the patio with John. Mary loved to play the French horn, which she learned in high school and refined at the University of Iowa. In later years, she took up the piano. She cared for animals and always had a dachshund as a companion. As her grandchildren were born, she was an eager baby-sitter. It was a joy for her to entertain and watch them grow physically and spiritually. She enjoyed sports and played tennis in her youth. In college, Mary was an avid cyclist by taking trips through Iowa and Wisconsin on an old balloon tire bike. She was also a devoted Iowa Hawkeye fan, always cheering on the football and basketball teams.

To order memorial trees or send flowers to the family in memory of Mary Bricker , please visit our flower store.
Send a Sympathy Card