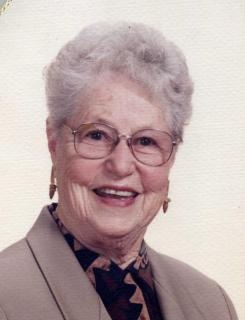 Funeral Services: Thursday, March 17, 2011, at 1:00 p.m. at the First Presbyterian Church in Greenfield with burial in the Hill of Zion Cemetery rural Orient.

Family Visitation: Wednesday, March 16, 2011, from 5 to 7 p.m. at the First Presbyterian Church in Greenfield.

Memorials: To the First Presbyterian Church in Greenfield.

Mary Jean Kuhns was born on June 10, 1920, in Montevideo, Minnesota, the daughter of Roy and Evalyn (Powers) Michie. She passed away on Sunday, March 13, 2011, in Greenfield, Iowa, at the age of 90. Mary Jean became a Christian when she was 18 years old.

Being born and reared in Minnesota she loved the north country with its pines and lakes and spent many summers there. She loved nature and was an environmentalist and worked as a volunteer for the D.N.R. protecting loons for 18 years. She has a B.A. in music and minors in English and Biological Science and taught for 20 years. She cared very much for her students and loved teaching.

She married Gerald Kuhns in 1943 and he passed away in 1984. To this union three children were born: Gary Eugene, passed away after 5 weeks of life, Gene, and Linda.

She was a member of the Methodist Church most of her life and was active in U.M.W., choir, and bible study. She has been a member of the Presbyterian Church since moving to Greenfield. She was a member the Federated Club, Bancroft History Assembly for 32 years and was a District Officer and received a state award for her conservation efforts.

She worked as a volunteer for the Minnesota Department of Natural Resources in tracking loons, their chicks and nesting. She was written up in the Minneapolis Star Journal and also documented on TV for NBC, ABC, and EPA and National Geographic's for her efforts in saving the loons and was known as the "Loon Ranger". She was written in a book "Another Woman" by Jim Lincschburg. This is a book about people in and around Woman Lake in Minnesota. She lived on a farm in Adair County most of her married life and loved the animals and worked in the fields side by side with her husband.

She is survived by her son, Gene (Doc) Kuhns and wife Deb and daughter, Linda Sidey; three grandchildren Matthew and wife Denise, Samantha and husband Chad Jensen, and Nathan and wife Abby; seven great grandchildren, Maxwell, Mallory, and Macy, Ellie and Ty, and Mila and Savannah; step grandchildren, Kenneth Sidey and wife Vickie and David Sidey; step great grandchildren, John, Heather and Kirk; sister-in-law, Bernice (Bunny) White, many grand nieces and nephews; other relatives and friends. She has special friends she cared deeply for: Martha and Bob Knutson of Longville, Minnesota and many friends in Greenfield and Creston, Iowa.

To order memorial trees or send flowers to the family in memory of Mary Jean Kuhns , please visit our flower store.
Send a Sympathy Card