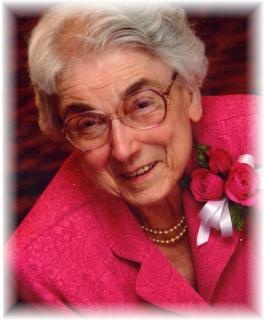 Funeral Mass: Saturday, May 26, 2012 at St. John’s Catholic Church in Greenfield at 10:30 a.m. with burial in the Fontanelle Cemetery. A luncheon will follow the burial at the church.

Memorials: In Lieu of flowers memorials may be directed to the St. John’s Catholic Church, Adair County Memorial Hospital or Fontanelle Rescue Unit.

She (Sis) and her 7 siblings grew up on a farm. Mary graduated from Odebolt High School in 1941 and was employed by the Odebolt Bakery. On January 22, 1949, Mary was united in marriage to Harold Larson and began their life near Wall Lake. In 1964, they moved their family to a farm north of Fontanelle to raise their 5 children. Following her husband's death in 1984, Mary moved to Greenfield and enjoyed working at Breadeaux Pizza and Adair County Historical Museum. Mary enjoyed baking, (was well known for baking of her pies, buns, cakes, and rolls), reading, sewing, gardening, couponing, and spending time with her family. She was a member of St. John's Catholic Church and the Altar and Rosary Society.

Mary was preceded in death by her husband Harold; parents Ernest and Anna Vernia; a son, Alan Larson; 5 brothers; and her son-in-law, Guy Powell.

To order memorial trees or send flowers to the family in memory of Mary Larson , please visit our flower store.