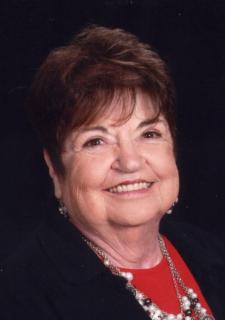 Mass of Christian Burial: Will be held on Saturday, January 2, 2016, at 10:00 a.m. at the St. Patrick Catholic Church in Massena with burial in the Victoria Township Cemetery south of Massena. A luncheon will be held at the church following the burial.

Scripture Service: All are welcome at a prayer service to be held before the family visitation on Friday at 5:00 p.m. at the St. Patrick Catholic Church in Massena.

Family Visitation: The family will greet friends on Friday evening from 5:30 p.m. to 7:30 p.m. at the St. Patrick Catholic Church in Massena.

On the morning of December 30, 2015, Mary Stender passed away peacefully surrounded by her husband and children at the Madonna Rehabilitation Hospital in Bellevue, Nebraska. She was 72 years old.

Mary Jean and her twin brother Lary Dean were born in Creston, Union County, Iowa on December 31, 1942. Lary was born first, making Mary the youngest of five children and only daughter of William J. and Grace May (Coleman) Kosar.

The Kosars made their home in Massena, Cass County. At the age of fifteen, through the influence of her friends Beth Waters and Mary Ann Mills, Mary was baptized and joined the Catholic Church on May 10, 1958 at St. Patrick Church in Massena. Charlotte Langfelt was her godmother. She was confirmed the next day. She attended elementary school in Massena and attended the Cumberland & Massena Community High School freshman through junior year. Mary spent her senior year at the Mount St. Scholastica Academy in Atchison, Kansas and graduated with the class of 1961.

She briefly entered the novitiate of the Benedictine Sisters in Atchison but decided that the religious life was not her ultimate vocation. She moved back to Massena and started dating Arlo Stender. Mary and Arlo were married on April 28, 1962 at St. Patrick Catholic Church. After their honeymoon at the Bridal Cave in Camdenton, Missouri, Mary and Arlo set up housekeeping in rural Union Township east of Cumberland, Iowa.

Mary and Arlo were the parents of three children: Julie Anne, born in 1963; Jennifer Kaye, born in 1968; and John Charles, born in 1978. The Stenders reared their family on their farm in Union Township for thirty-one years until they moved with John to the “Pettinger Place,” also in rural Union Township. In 1996 Mary realized her childhood dream and moved into their home across the street from their church in Massena.

Being a grandmother was the joy of Mary’s life. She was a regular babysitter, a generous gift-giver, and loved her grandchildren beyond measure. She particularly enjoyed cooking for the boys and finding a treasure at a garage sale with the girls. In later years, Mary was proud to be a great-grandmother (grand-ma-ma) as well.

Mary’s most defining characteristics included her outgoing personality, generous heart, and ability to visit with everyone she met. She maintained and nurtured relationships that she made as a child and continued making friends until the day that she died. From coffees and camping, antiquing and junking, to crafting and sewing, she loved to have fun with her friends and family.

Mary was a member of St. Patrick Catholic Church, the Altar and Rosary Society, the Massena Lion’s Club, Heartland R. S. Prussia Collectors Association, and served as Vice President of the Massena Centennial Celebration in 1986.

She was preceded in death by her parents; stepfather, Charles Dudley Dougherty; father-in-law and mother-in-law, John and Dorothy Stender; a brother, Billy Kosar, who died in infancy; two stepsisters, Joan Erickson and Jean Eden; two brothers-in-law, Ernest Stender and Dennis Oathoudt; and a step-nephew, Brett Eden.

She is survived by her husband, Arlo Stender; her children and their husbands, Julie & Curt Symonds and Jennifer & John Arp all of Massena and John & Tom Stender-Custer of San Diego, California; her grandchildren and their spouses, Laura & Tristan Hapes and Luke & Emily Symonds all of rural Massena, Ryan Arp of Changzhou, China, Angela Arp of Des Moines, and Ethan Arp at home; and two great-grandchildren, Isaac and Dominic Hapes at home. She is also survived by three brothers and their wives, Joe & Lyne Kosar, John & Mary Ann Kosar, and Lary & Pauline Kosar; her Stender sisters-in-law and brother-in-law, Shirley Stender, Kent & Julie Stender, and Karen Oathoudt; a first-cousin and husband, Maxine and Mike Murray; and many other cousins, nieces, nephews, and friends.

To order memorial trees or send flowers to the family in memory of Mary Stender , please visit our flower store.
Send a Sympathy Card