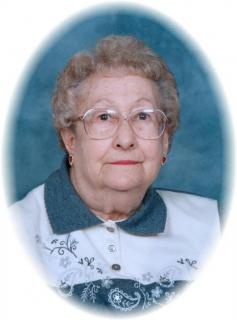 Graveside Services: Tuesday, January 10, 2012, at the Fontanelle Cemetery, Fontanelle, Iowa, at 2:00 p.m. with pastor Cathy Nutting officiating.  A luncheon will follow the graveside service at the Fontanelle United Methodist Church.

Memorials: May be directed to the favorite charity of your choice in Marybelle's name.

She was preceded in death by her husband Donald Victor Handley in 1988: three sisters, Naomi Murray, Dorothy Hains, and Betty Clemens.

She is survived by her daughter, Linda Diane Allison and son-in-law, Don, of Tulsa, Oklahoma; sister, Mabel Root (104 years) of Clearfield, Iowa; and numerous nieces, nephews, cousins, other relatives and friends.

To order memorial trees or send flowers to the family in memory of Marybelle Handley , please visit our flower store.